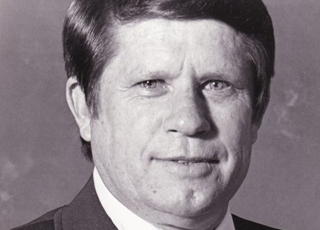 Manoah Shadrach “Digger’ O’Dell was healed by the Great Physician on Friday, Aug. 5, 2016. A Memorial service celebrating his new life will be held Saturday, Aug. 13, 2016 at 2:00 p.m. at First United Methodist Church in Minden. The Rev. Brian Mercer and Dr. Carl Rhodes will preside. The family will receive friends and family from 12:30 p.m. until the time of the service at the church.

Born April 19, 1926 in Amarillo, Texas. “Junior” or “Peanut” as he was known by his family was one of nine children born to Meryl Dona Arnold O’Dell and Manoah Shadrach O’Dell. Junior graduated from Amarillo High School and joined the Navy on June 1, 1944. He served in World War II at the naval base in Guam. In 1946, he picked up the nickname, “Digger” which stayed with him all his life. After the navy, Digger helped build a radio/television station KICA in Clovis, New Mexico. He met the love of his life while working there. Digger and Nelva Dunn O’Dell were married on May 5, 1948 in Portales, New Mexico. They recently celebrated 68 years of marriage.

In April of 1948 he met Bo Cook and became close friends. This friendship created a partnership when they both bought KASO in Minden in 1962. Bo and Digger built KASO into a community voice for the city of Minden. Digger and Bo remained partners until 1985. Digger’s second career was serving four terms on the Webster Parish Police Jury. Over the years Digger gave great contributions to the city of Minden. Digger was named “Man of the Year” in 1989. He was an active member of the Civitan Club of Minden. He was instrumental in the development of two recreation centers and Dixie Boys Baseball for the whole community. KASO radio initiated the St. Jude Radiothon in the late 1970’s, sponsored Kids Day parades, and fishing rodeos in a time when kids and families needed opportunities for fun and fellowship. KASO also broadcasted all types of sports events, civic activities, etc. for the community. Digger and Bo made the betterment of Minden their business focus. Digger also loved golf. In his lifetime, he had five hole-in-ones. He sponsored Pee Wee Golf tournaments for kids at Pine Hills Country Club. At a time when there was no recreational football for youth, Digger would gather neighborhood teams on Saturday morning and referee the game.

First United Methodist Church was a priority in Digger’s life. He served on the Administrative Board as well as building committees and usher throughout the years. In the 1960’s and 70’s, he and Nelva would chaperone the summer trips that the youth would take. Digger pitched slow pitch softball with the church team into his late 50’s.

Digger is preceded in death by his parents, Myrl and Manoah, and his two daughters Karen O’Dell Eskew and Sharon O’Dell Hulse. Digger is survived by his wife, Nelva Dunn O’Dell; two sons, the Rev. Larry D O’Dell and wife, Judy, Dr. M. Jack O’Dell and wife, Mandy; two sons-in-law, Lynn Eskew and Steven Hulse; and two sisters, Merle Blackwell and Mateel Brown. He loved traveling with his 11 grandchildren. He enjoyed playing and joking with his 25 great-grandchildren.