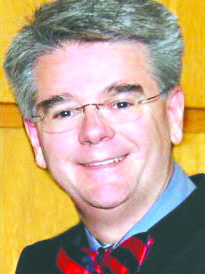 Judge Jay McCallum will be the speaker at the Minden Lions Club meeting at noon on January 4, 2018. McCallum is a motivational speaker who is best known for using humor to instruct, inspire and motivate his audiences.

McCallum was the first person in his family to earn a college education.

He was an honor graduate who qualified for National Forensic and Debate Competitions. He received his Bachelor of Business Administration from NLU, now ULM, and his Juris Doctorate from LSU School of Law.

Prior to being elected judge, McCallum was a partner in the law firm of Rabun and McCallum in Farmerville, Louisiana.

Judge McCallum and his wife, Deanna, have two children, John and Sarah Katherine. Sarah Katherine, a junior in high school, was last year’s Miss Louisiana Outstanding Teen. John, a Harvard graduate, and his wife, Brooke live in Los Angeles, California. The McCallums are members of the First Baptist Church of Farmerville, where Jay serves as a deacon.