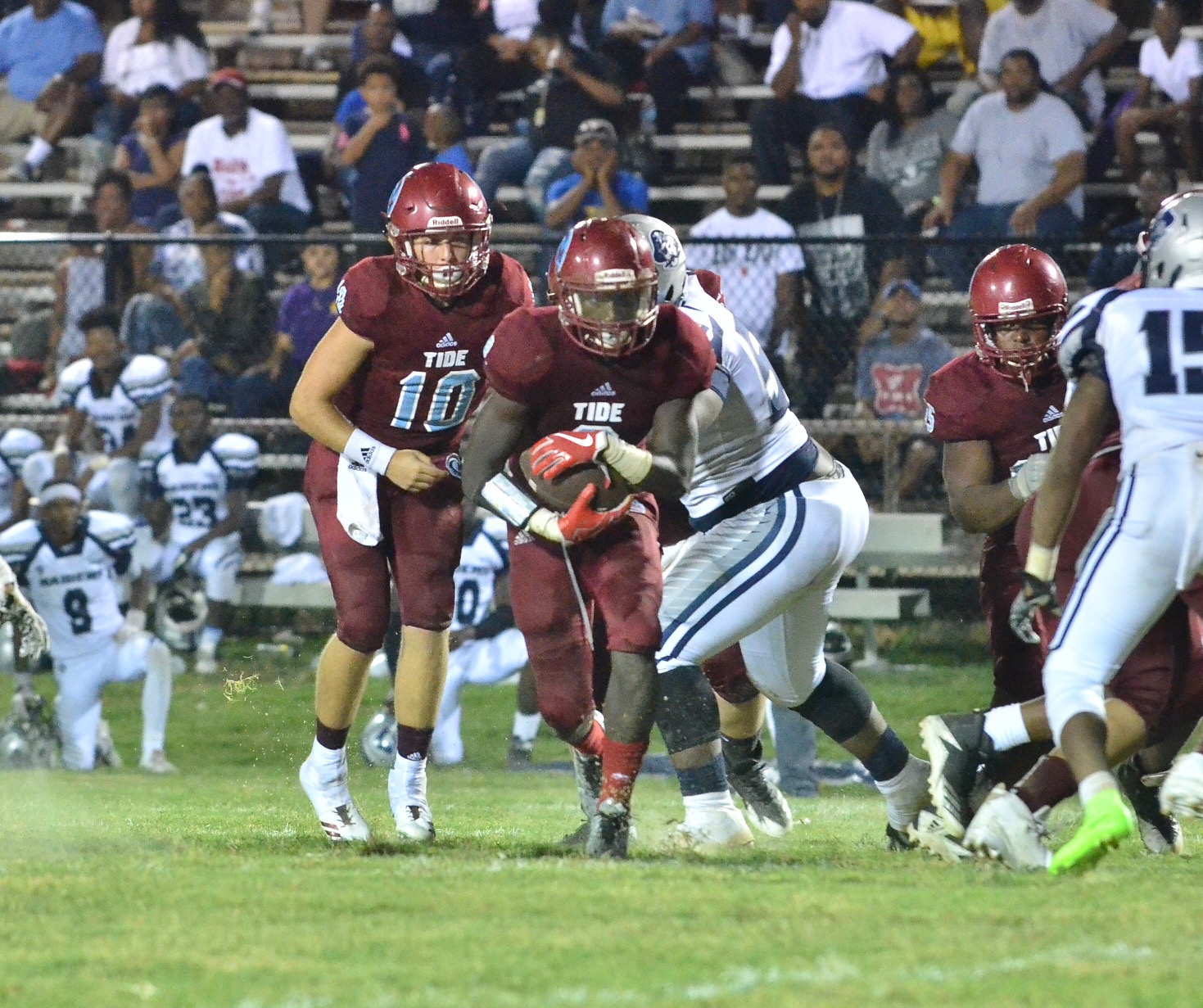 Huntington made Minden and the legion of fans who turned out to see the newly-renovated Pit sweat it out.

In front of a packed house, the Crimson Tide (3-1, 1-0) were victorious in their home debut, but only by a touchdown against elusive Raider running back Craig Davis and the rest of an improved Huntington team.

Huntington had the ball near midfield with a chance to tie or take the lead late in fourth-quarter action, but Minden’s Jacareon Lathan came up with an interception to seal the deal and preserve a 21-14 victory.

It was Patrick Heard’s 79-yard touchdown catch and run that put Minden up 21-6 early in the fourth quarter. At the time, it looked as if the score was only precautionary, but the Tide ended up needing the big play in the end.

Despite the drama, Minden has won three in a row and is 1-0 in district 1-4A play.

“I can’t remember when I looked up in the stands, maybe it was the second or third quarter,” Minden head coach Spencer Heard said. “It was a completely packed house. I appreciate everybody showing up. I know the kids were excited to be in front of that crowd. It was a nice night.”

In terms of execution, it was only an okay night, as offensive miscues allowed the Raiders to hang around.

“We know we have to play better,” Heard said. “It was kind of the same old song and dance. The defense played well, but we left them out there too long and they got tired and gave up the late scores. At times, especially early in the game, the offense looked like it was kind of clicking. We had some nice runs, throws and catches, but for some reason after halftime we went into a funk. Luckily, we got out of it with a big play.”

Minden got on the board first near the end of the first quarter when running back Zack Gage took a handoff and broke several tackles, emerging from the pile unscathed for a 20-yard touchdown run.

As Minden’s defense swarmed Huntington’s running game, the offense went back to work just before halftime when Seth Tyler hit wideout Lemoris Jackson Jr. in stride with a perfectly-thrown ball for a 34-yard touchdown. Jackson ran a good route and shed the only tackler between himself and the goal line, cruising to the end zone to give the Tide a 14-0 lead at the break.

The Raiders refused to quit, storming back with a pair of Davis touchdown runs, even converting a fake punt to keep one of the scoring drives alive, but Minden had one more big play in their arsenal with Heard shaking loose for the decisive 79-yard score.

Davis, who broke the Huntington school rushing record with 318 yards in a week 3 loss to Captain Shreve, finished the game with 124 yards and two scores running into the teeth of the Minden defense.

Zack Gage led the Tide with 79 rushing yards and a score; Tyler completed 10-of-16 passes for 138 yards and two scores; Patrick Heard led all Tider skill players with 116 all-purpose yards.

Minden hits the road this week to take on Booker T. Washington, before returning home to take on Benton Oct. 6 in The Pit.