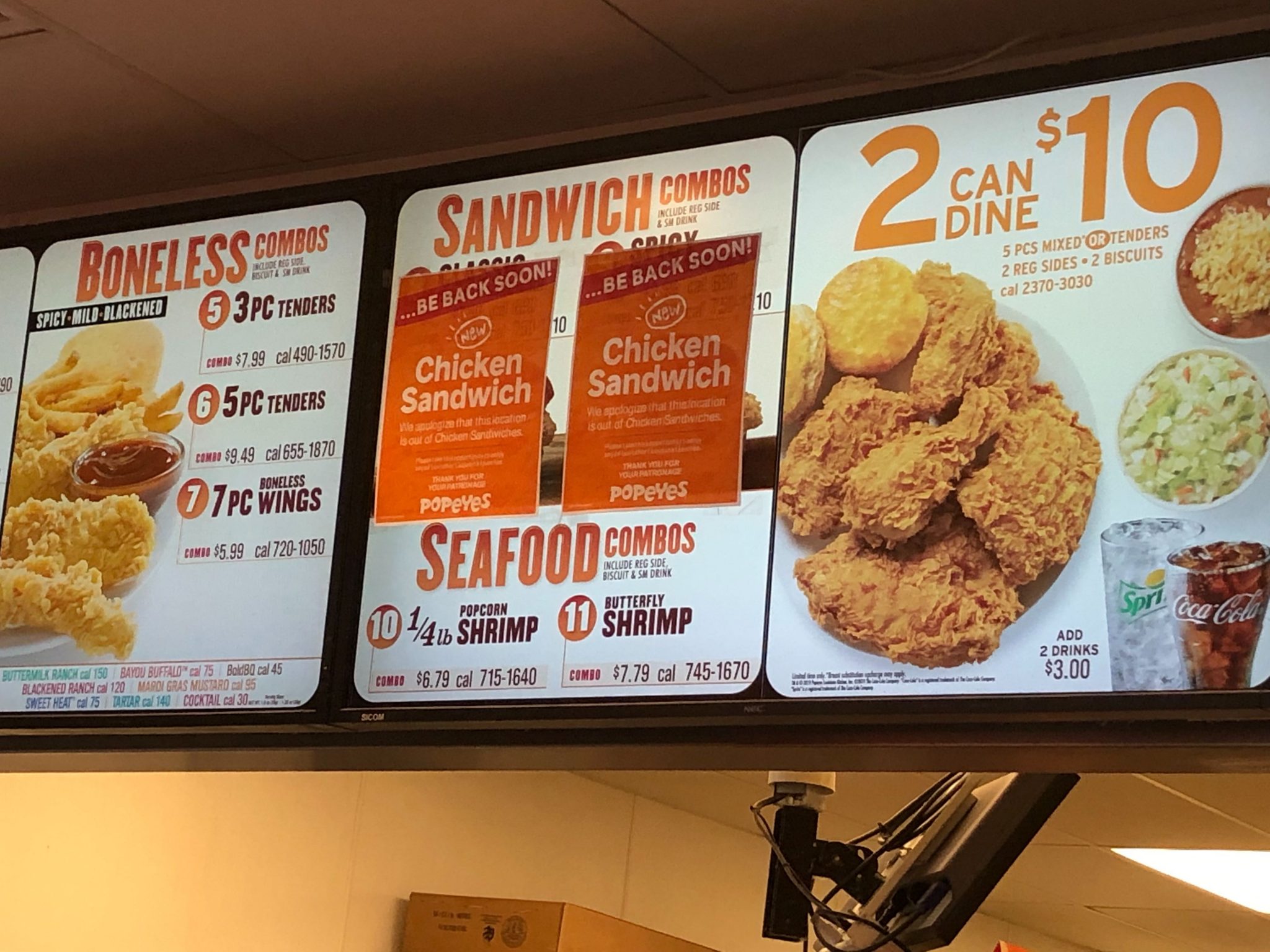 Editor’s Note: The following is updated from a story that was posted Tuesday afternoon.

Popeyes is out of chicken sandwiches. However, there may be hope for their return in the future.

As of Tuesday, it seemed that the Minden location wasn’t “planning on re-stocking them at all,” a member of local management said, requesting to remain anonymous. The same manager said that during the brief period of time they were selling the chicken sandwiches, it “got out of hand.”

That’s isn’t what Popeyes is saying nationally, however. Popeyes announced on Twitter Tuesday that they’ve sold out.

The fast-food chain tweeted Tuesday: “Ya’ll. We love that you love The Sandwich. Unfortunately we’re sold out (for now).” A video stated that the chicken sandwiches will be back soon for good, a statement which was confirmed by regional management Wednesday morning.

According to an Associated Press report, people are choosing sides and beefing over chicken. With just one addition to a fast-food menu, the hierarchy of chicken sandwiches in America was rattled, and the supremacy of Chick-fil-A and others was threatened.

While Popeyes has been selling chicken for a long time, the chain was a contender in the bone-in, skin-on, fried-chicken space, not the fried, boneless, skinless cutlet on a bun.

And from that moment, it was ON.  People began ardently advocating for their favorite sandwich, whether it be the new-kid-on-the-block Popeyes one, or the OG Wendy’s or Chick-fil-A versions.

And the social media managers for the companies reveled in the green light to talk smack to each other.

“We Didn’t Invent The Chicken, Just The Chicken Sandwich!” Chick-fil-A bragged on Twitter. “Bun + Chicken + Pickles = all the (heart emoji) for the original.”

To which Wendy’s responded: “Ya’ll out here talking about which of these fools has the second best chicken sandwich.”

Popeye’s quick retort: “Sounds like someone just ate one of our biscuits.  Cause ya’ll looking thirsty.” (Which frankly seemed as if they were bragging about dry over-salted biscuits?  Wendy’s thought so, too, tweeting, “lol, guess that means the food’s dry as the jokes.”)

But why has the meager poultry sandwich riveted a nation so? Why do people have such intense feelings about a fried chicken cutlet on a bun?

Nancy Hopkins, former food director of Better Homes & Gardens magazine, and a veteran food editor for over 20 years, has this to say: “America loves anything crunchy, salty, crackly, and good. And Americans love chicken. Just about any way.”

“But this sandwich is simple and straight to the point,” she said.  “We love fried chicken, but we don’t make it at home and we love it as a splurge. The sandwich seems less guilty. The thought of it fitting nicely on a bun seems better for us. It is just simpler all the way around. Pressure fried chicken, a pickle, and a bun.”

In February Bon Appetit ran a story about why fried chicken sandwiches were so popular, and traced the answer to a creation in the 1960s by Chick-fil-A’s founder, Atlanta restaurateur S. Truett Cathy.  In the ensuing years everyone from fast-food chains to renowned chefs started offering their version of the fried-chicken sandwich, with many garnering praise and a devoted following.

Perhaps that’s fitting in this day and age. As Twitter user @cHolidaydds said: “There’s nothing more American than being divided over something. This week it’s a chicken sandwich.”

Locally, the debate will rage on, as Minden does not have a Chick-Fil-A and the date of Popeyes Chicken Sandwich’s return is uncertain.