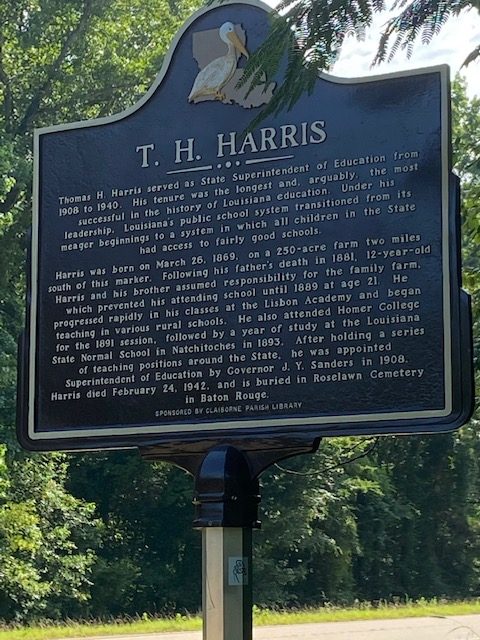 I grew up in the hills of north Louisiana not knowing until much later that not too far back in my lineage was a rather famous relative, long-time state Superintendent of Education, Thomas H. Harris.

I have a vague memory of meeting him as a youngster when “Uncle Tom” came to visit his older brother, Ausie, who was my grandfather.

A book given to me by a dear friend and former co-worker, Rae Tatum Malone, is one of my prized possessions, “The Memoirs of T.H. Harris”. In this book he tells of his 32 years as Superintendent of Education but also talks about his growing up years on a 250 acre farm in the Arizona community of Claiborne Parish located between Homer and Lisbon.

One of the most shocking bits of news he revealed in the book was the fact that Thomas H. Harris was not his real name. Here’s how he describes it….”My name is not Thomas H. Harris, but Lee Marcus Harris. The name by which I have been known all my life developed as follows: When I was about three days old, my next older brother, Ausey, three years of age at the time, was invited to inspect his baby brother. Ausie looked me over and said, ‘Little Tom”. And Tom I was thenceforth and forever.”The middle initial “H”, which stands for nothing, was added later.

When my job transferred me to Homer in 1964, my memories of my great uncle Tom were vague at best. I was more interested in squirrel hunting on Middle Fork, deer hunting with

Bill Bailey and his hounds around Summerfield or fishing in the brand new Lake Claiborne. I was to learn later that a goodly portion of the land inundated by the popular lake was acreage on which my grandfather and his more famous brother grew up.

I was also aware that the community of Langston south of Homer had been renamed in honor of my great uncle. It is now known as the Harris community with a school there, a school that is now a church encampment, the Harris Baptist Encampment.

Scores of college students down through the years have had at least a portion of their tuition paid for by being recipients of the T.H. Harris Scholarship. I regret missing out on that honor; I was having too much fun with college life to have qualifying grades.

Buildings on college campuses around the state today are named after my great uncle. In Grambling, for example, you’ll find the T.H. Harris Auditorium constructed in 1960 at the University.

This column, I realize, is not my usual outdoors related missive. It has little to do with my coverage of hunting and fishing experiences. When I received word that a memorial plaque was to be erected in honor of uncle Tom, I wanted to see it.

Last week, my sister and I motored up to Homer to see if we could find it, and we did. Located along Highway 2 between Homer and Lisbon, the marker sits within two miles of where T.H. Harris and my grandfather grew up. We also found another marker along Arizona road marking the site of the Arizona Academy from which he graduated.

I may not have many famous kin but it is gratifying to know that I had one, and even had the honor of my grandfather naming him. Lee Marcus just doesn’t have the same ring as “little Tom”.

BUSSEY BRAKE – Bream fishing has been good fishing worms or crickets around the trees. Bass continue to be fair around the willows on soft plastics and spinners. Crappie are scattered and fair. No report on catfish. For latest information, contact the Honey Hole Tackle Shop at 323-8707.

BLACK BAYOU – Bream fishing has been good on worms and crickets. Bass have been fair around the edges of the grass and brush on jigs and spinners. Crappie are scattered and fair on shiners or jigs. Contact Honey Hole Tackle Shop 323-8707 for latest information.

OUACHITA RIVER – The river is falling and crappie fishing has improved in the river fishing around the deep tops on shiners and jigs. Bass have been best in the mouth of the cuts on crank baits and soft plastics. Some catfish have been caught this week. latest information, contact the Honey Hole Tackle Shop at 323-8707.

LAKE D’ARBONNE – Bass have been fair fishing the deep holes in the channels especially at the mouth of creeks and run-outs. Soft plastics, jigs and crank baits are picking up a few. Early mornings best bets are topwater lures and plastic frogs around shallow grass. Crappie fishing continues to be best fishing the flats in 20 foot water fishing 8-14 feet deep on shiners or jigs. Bream fishing is good on worms and crickets. Catfishing continues to be good off the banks and on the flats on night crawlers and cold worms. For latest reports, call Anderson’s Sport Center at 368-9669 or Honey Hole Tackle Shop at 323-8707.

LAKE CLAIBORNE – Stripers are schooling and hitting topwater lures with the Chug Bug when they’re on top and trolling Bomber Fat Free Shad in citrus color working on fish when they’re down. Bass have been better at night fishing crank baits and Shaky Heads around the lights.  Some are also being caught fishing the points on the main lake with crank baits. Report this week of a bass weighing 10 pounds being caught. Crappie have been better at night around the lights in 20 foot deep water. Bream are still around the beds and catfishing has been fair on cold worms. For latest information, call Kel’s Cove at 927-2264 or Terzia Tackle at 278-4498.

CANEY LAKE – With summertime weather arriving on the scene, some good bass ae being caught on deep diving crank baits and over-sized plastic worms along the drop-off to the deeper holes. Some are chasing shad on top and hitting a variety of shad imitation topwater lures and crank baits with some caught at night around the lighted piers. Crappie are around the deeper tops and hitting jigs and shiners fished 12 feet deep in 15-25 foot water. Some bream are still around the beds and hitting crickets and worms. No report on catfish. For information contact  Hooks Marina at 249-2347, Terzia Tackle at 278-4498 or the Honey Hole Tackle Shop at 323-8707.

LAKE POVERTY POINT – Catfishing has been good, bass and bream are fair while crappie are slow. For latest reports, call Poverty Point Marina at 318/878-0101.

LAKE ST. JOHN – Crappie are slow. Bass are fair early on topwater lures with soft plastics later in the day. Bream and catfish are good.  For information, call Ken Mahoney at 318-201-3821.

LAKE YUCATAN – The water is rising again rather fast and fishing has been slow. For information, call Surplus City Landing at 318/467-2259.