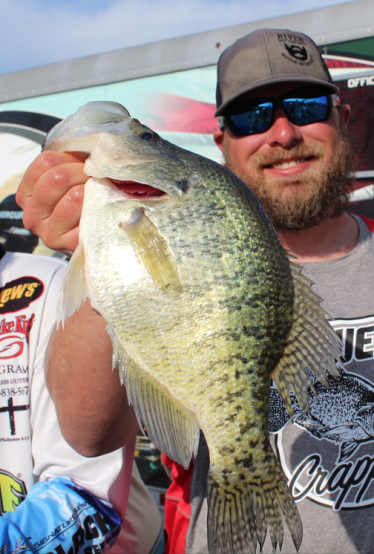 Lake D’Arbonne has been on fire lately as crappie tournament circuits from around the country have been focused on the lake as one of the country’s best hot spots for catching crappie. However, a potential problem has emerged regarding the lake’s ability to continue to produce bragging sized crappie. As a result, the Louisiana Wildlife and Fisheries Commission has proposed new regulations focused on these popular fish.

Ryan Daniels, freshwater fisheries biologist with the Department of Wildlife and Fisheries based in Monroe, oversees Lake D’Arbonne.

“The Commission adopted new regulations for crappie on the lake. The proposal calls for the establishment of a daily limit of seven fish over 12 inches in length with the overall daily limit continuing at 50 fish,” said Daniels.

The reason for the restrictions on fish over 12 inches, said Daniels, is that studies are showing a decline in the numbers of large fish in the lake. Setting the daily limit at seven for the larger fish adds protection of larger fish, he added.

“We realize that during crappie tournaments, participants can weigh in seven fish each day and we want to keep it at seven in consideration of tournament anglers,” he said.

Some crappie fishermen have for a long time been concerned about keeping the daily limit at 50 feeling this puts too much pressure on the population and adding that there is no need for anglers to bring that many fish out of the lake each day.

“We have done creel counts many times at boat launches and have found that very few fishermen are keeping even as many as 20 fish,” Daniels said. “We did not see a single angler with 50 fish. By keeping the daily limit at 50, we are attempting to encourage fishermen to keep more of these smaller fish because there is no shortage of smaller fish in the lake.”

“The piney woods that make up D’Arbonne’s watershed don’t have a lot of nutrients so the crappie don’t grow as quickly as they do in more fertile bodies of water. I have a problem with the 50 fish limit as I believe that is far too many fish per day. Today’s technology is making it so much easier to catch fish more consistently,” Miller said.

Miller pointed out that he fishes lakes in Texas and Arkansas, states that have more restrictive daily limits. “There are much better crappie populations there than here in Louisiana, both in numbers and size,” Miller said.

Keith Johnson, former Ruston resident who regularly fished for crappie on D’Arbonne is happy that the limit for fish over 12 inches is being proposed but in agreement with Miller, believes the daily limit of 50 is too high.

“I think they should drop the limit to 25 fish per day. D’Arbonne is a jewel of a crappie fishery and in my opinion, dropping the daily limit is the responsible thing to do,” Johnson said.

Now is the time for anglers interested in the crappie fishery on D’Arbonne to take advantage of the 60 day comment period to express concerns and make their wishes and suggestions known.

At the end of the period, the Commission will vote on whether or not to put these regulations into effect.

“I look for the decision to be made at the earliest in November,” Daniel said, “but it will probably be in early 2023.”

The Louisiana Department of Wildlife and Fisheries has scheduled a drawdown of Lake Bistineau in Webster, Bossier and Bienville parishes for the purpose of reducing the further expansion of giant salvinia.

The drawdown will additionally benefit fisheries production by improving aquatic habitat and reducing the amount of organic matter on the lake bottom.

LDWF has requested the Department of Transportation and Development open the water control structure on July 25.

Once the water control structure is open, the lake should dewater at a rate of 4 to 6 inches per day until it reaches a potential maximum drawdown level of 8 feet below pool stage.

This dewater rate could be impacted, however, by local rainfall in the surrounding watershed. During the drawdown, the department will monitor aquatic habitat conditions to determine the best time to conclude the drawdown and allow the lake to refill for early spring recreational activities.