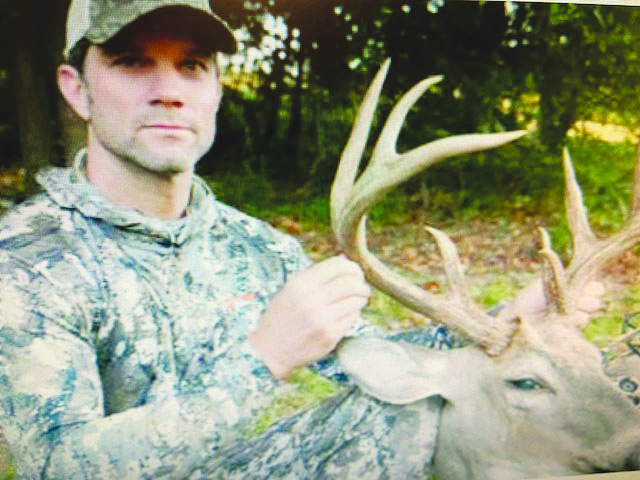 Dustin Brister arrowed a fine buck in Franklin Parish on October 2. However, he met serious challenges when attempting to retrieve his 10-pointer.

Brister, 46, lives in Ruston and works in medical sales. He and his brother Chris purchased 450 acres of land near Fort Necessity 12 years ago and this plot of land has become their go-to spot for deer hunting.

“We had this buck on camera for the past few years and Chris’ nine year old son, Mayes, looked at the photos and named the deer ‘Bucky,’ ” Brister said.

On the afternoon of Oct. 2, Brister decided this would be a good time to see if Bucky might make a showing. The wind was just right for where he had hung his saddle stand. An uncut soybean field bordered the property and Brister had found a deer trail he described as almost like a cow trail leading to the soybean field. It was obvious that deer were taking advantage of the buffet the soybeans provided.

“Before getting into my stand with my bow – I shoot a Matthews Halon bow, Full Metal Jacket arrow tipped with Rage 2 broadhead – I scattered some soybeans on the ground along the trail.

“I got on the stand around 4:45 and got ready. I was starting to get discouraged because from the time I crawled into the stand until 7:00, I had not seen a thing. Then just before giving up I caught movement along the trail and here came a seven point buck Bucky had been traveling with. Right behind the seven point came Bucky,” Brister said.

The two bucks headed for the soybeans he had placed on the ground and the smaller buck stood broadside and Brister ranged him at 27 yards. Bucky stood facing him, not offering the shot he wanted.

“Bucky bumped the seven point and as he did, he turned broadside to me and I drew my bow. Before I could shoot, he gave me an angling shot and I took it at about 29 yards. I heard a solid ‘thump’ and felt I had made a good shot as the deer took off running,” he continued.

Climbing down from his stand, Brister went to the spot where the deer was standing and found a great deal of bubbly blood indicating a lung shot. He felt confident he’d find the buck piled up not far away. That, however, was not the case.

Since it was getting late and he could see the blood trail leading through a thicket and straight to a creek, he decided to back out and call a friend to help in the search.

Brister called his friend John Brown who manages the property for the Bristers and Brown suggested they call Brian Rieger who had a blood trailing dog. Reiger didn’t get there until around 11 that night, his dog picked up the trail that, once again, led to the creek. Incredibly, the deer had crossed the creek for a third time.

“When the dog stopped, Reiger told me he bet the deer was dead and lying in the creek. We shined a light and sure enough, the buck had crossed to the other side but had died in the shallows along the far bank,” he said.

By midnight, the buck was finally transported to camp where measurements were made. The rack sported 10 points with heavy bases of five and six inches. Inside spread was 18 inches, main beams were 21 and 22 inches and the buck was determined to be 5 1/2 years old. His estimated weight was 235 pounds. The rack was scored at 148 4/8 inches.

Shooting the deer was easy. Retrieving him was anything but.

BLACK BAYOU – Bass have been fair around the trees and brush. No report on crappie or bream. Contact Honey Hole Tackle Shop 323-8707 for the latest information.

OUACHITA RIVER –  The water is at pool stage. Crappie fishing has been fair with best catches made around submerged tops in the river on shiners or jigs. Bass are fair fishing the run-outs with topwater lures early and crank baits and soft plastics later. For the latest information, contact the Honey Hole Tackle Shop at 323-8707.

LAKE D’ARBONNE – Crappie fishing has been improving on jigs or shiners along the channel edges fishing 8 feet deep in 12-foot water. They are still scattered and have not bunched up just yet. Bass are still chasing shad and are hitting topwater lures early with soft plastics working best later in the day. Bream are slow while catfish are biting cold worms fished off the banks. For the latest information, call Anderson Sport Center at 368-9669 or Honey Hole Tackle Shop at 323-8707.

LAKE CLAIBORNE – Crappie continue be in their  Bass have been fair up Horse Creek skipping jigs under the docks with Bandit crank baits picking up a few as well. The crappie are in 12-14 foot water still scattered but will be bunching up more as the water cools down. Catfishing has been fair. No report on bream. For the latest information, call Kel’s Cove at 927-2264 or Terzia Tackle at 278-4498.

CANEY LAKE –  Crappie are still around deep brush with not too many being caught but some real slabs are hitting jigs and shiners. Bass are best early mornings on topwater lures with best catches made later around boat docks and piers on soft plastics. No report on bream or catfish. For information contact Hooks Marina at 249-2347, Terzia Tackle at 278-4498 or the Honey Hole Tackle Shop at 323-8707.

LAKE POVERTY POINT – Crappie fishing has been off and on with good catches made one day and fair the next on shiners or jigs. No report on bream or bass. Catfishing has been good on a variety of baits. For the latest reports, call Poverty Point Marina at 318-878-0101.

LAKE YUCATAN – The water is the lowest it has been in years. A few slab crappie are being caught while bass and catfish are fair. For information, call Surplus City Landing at 318-467-2259.