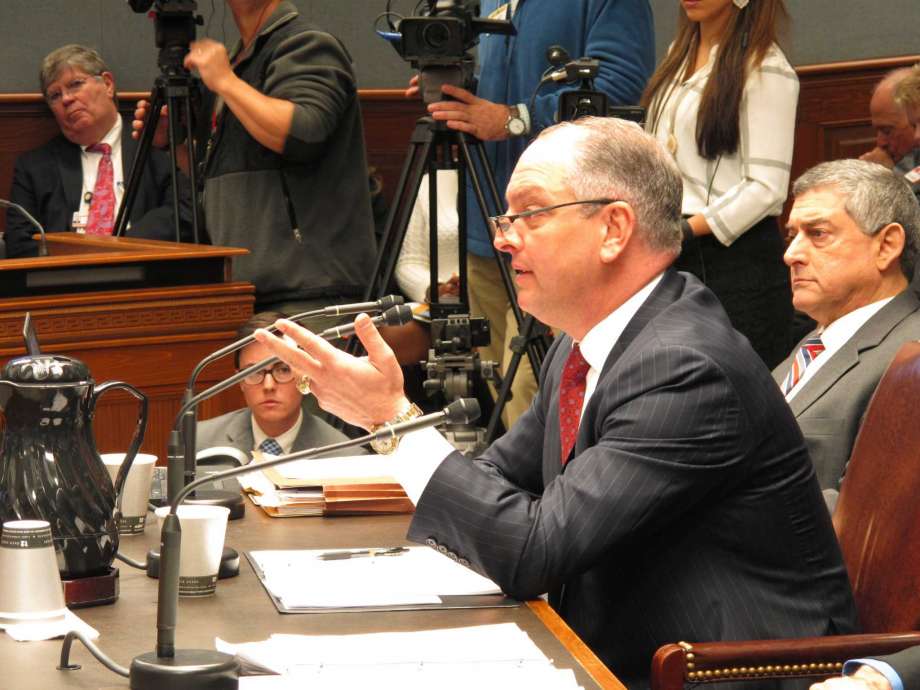 BATON ROUGE — Gov. John Bel Edwards laid out his reasoning to lawmakers Friday for a deficit-closing special session, saying he won’t seek tax increases to close the $304 million gap and will try to protect education programs from cuts.

The Democratic governor spoke to the joint House and Senate budget committee, describing plans for a less than two-week special session to begin Feb. 13, to rebalance the $27 billion state operating budget for the fiscal year that began July 1.

“I’m the last person who wants another special session,” said Edwards, who called two such sessions last year to deal with budget gaps. “But when we’re looking at cuts of this magnitude, I believe it would be irresponsible not to open up the entire budget to scrutiny and it would be negligent to exclude the public from decisions that will affect them so much.”

Edwards wants to use more than $119 million from Louisiana’s “rainy day” fund to partially fill the shortfall and eliminate the rest of the deficit with cuts.

“There will be no proposal from my administration to raise a single tax or fee,” he said.

But the governor said Republican and Democratic lawmakers have asked that he allow them to consider fee hikes, so he’ll give lawmakers that option in the parameters of the special session that he’ll call.

He didn’t provide specifics about where he proposes to make cuts, saying he’ll submit that detailed legislation by Feb. 6. But Edwards said he wants to spare public colleges, K-12 education, prisons, the social services department and certain health services for the poor and people with disabilities.

He warned the other reductions needed to rebalance the budget will be deep and painful.

Some GOP lawmakers are resistant to using the rainy day fund, saying Louisiana needs to make permanent cuts to better match the state’s spending to its income rather than using the savings account for a temporary fix. Tapping into the fund requires a hefty two-thirds vote of the House and Senate, which could be a difficult hurdle for Edwards to reach.

Rep. Lance Harris, chairman of the House Republican delegation, suggested state government has grown too large and must be pared back. He said state spending has swelled by 4 percent annually over the last 14 years, compared to 2 percent yearly growth in the Consumer Price Index.

“Our government has actually been growing at a rate of two-to-one over the private sector. So, there are I think some legitimate concerns,” said Harris, R-Alexandria. “We should have addressed the over-growth of government many years ago.”

“We ought to just be careful about the numbers we use and the facts that we look at,” he said.

Edwards said using the rainy day money may not be “the ideal approach,” but he said it would help stop “more devastating cuts.”

House Republican leaders have balked at the budget-rebalancing session, saying Edwards and the budget committee could make the cuts on their own, without calling the full Legislature back to Baton Rouge. They’ve said such a session will bear unnecessary costs.

No lawmakers Friday challenged Edwards’ directly on his decision to call the session. Several Democrats said they supported it.

Edwards said constitutional limits on his and the committee’s abilities to cut spending would force limited areas of the budget to take the brunt of the cuts, usually higher education and health services. A special session, he said, will allow lawmakers to cut more broadly and more strategically.

The session will have to end by Feb. 23, but Edwards told lawmakers it could wrap up early “if we can all agree to
work together.”