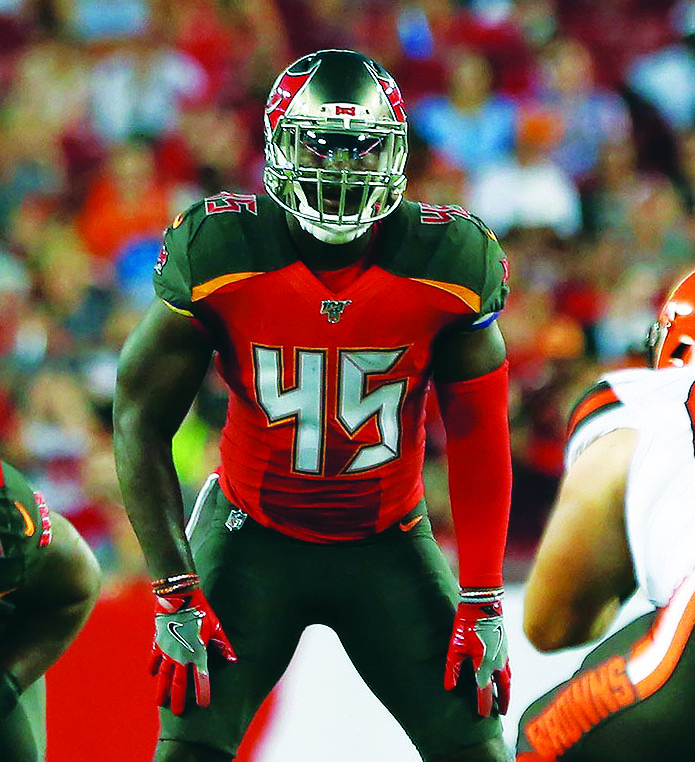 It may not have been the ideal homecoming Devin White had hoped for upon making his first trip to the Mercedes-Benz Superdome to face NFC South rival New Orleans on Sunday, but it didn’t keep the 2019 Tampa Bay first-round draft pick and Cotton Valley native from enjoying the moment with smile or two.

Despite being made active by the Buccaneers (2-4) after missing the two previous games with a knee sprain (MCL), the rookie starting linebacker, who has eight tackles on the season, did not see action in the Tampa’s 31-24 loss to the Saints (4-1).

White talked to Specht Newspapers (Bossier Press-Tribune and Minden Press-Herald) in the Bucs’ locker room following the game and said he’s ready when the team makes the call.

“Everything as far as my knee, is back healthy,” said White. “Did some great rehabbing thanks to [head trainer] Bobby Slater — he’s got me back right, so just whenever they are ready, I’ll be ready.”

When asked if it was in the plan not to play, White reiterated his previous comment in diplomatic poise.

“Whatever my coaches want,” he said. “Just go to practice, put in the work and whatever they say, whenever they call me, I’ll be ready.”

This was not the first time the fifth overall draft pick — the highest linebacker in LSU history — has seen action in the Superdome. White last played here in 2017 when the LSU-BYU game was relocated from Houston due to the devastating impact of Hurricane Harvey.

“We beat them pretty bad,” said the 2018 Butkus Award winner of the 27-0 shutout of the Cougars, where he led the Tigers with five tackles. “That was my last time here.”
However, White admitted representing LSU in the Superdome is a far cry removed from returning as a Buccaneer to oppose the Saints.

“Big difference, you hate it,” he said. “When you come with LSU, obviously everybody loves you — it’s home.

“People still show love. Saints fans that knew me wished me well. It’s a great feeling, in Louisiana they stick with you, especially when you are a hometown guy, but they are not going to cheer for you when you are playing their Saints.”

Before the game, White took photos with friends and family, who made the five-hour trip down from Webster Parish, including his mother Coesha.

“It was a blessing, anytime my family can make the trip,” admitted White gratefully. “You know, growing up, playing ball right there at the house, even in college playing at LSU, they came to every game. It was like a big family reunion every weekend at Tiger Stadium.

“You know, that’s what they do — they support tremendously on the field or off the field,” he continued. “I’m just happy to be back in Louisiana, it’s a great place to be — greatest state in the world.”

When asked if he still had ties to his alma mater and former North Webster coach John Ware, White assured Specht he was keeping a close eye on his former team.

“I keep up with them,” he shared. “I got a lot of little cousins on the team, a lot of guys that I see myself mentoring. I always put positive vibes on them.

Aaron S. Lee is an international sports journalist for Eurosport, contributor to WGNO-ABC 26 in New Orleans and a graduate of Minden High School.