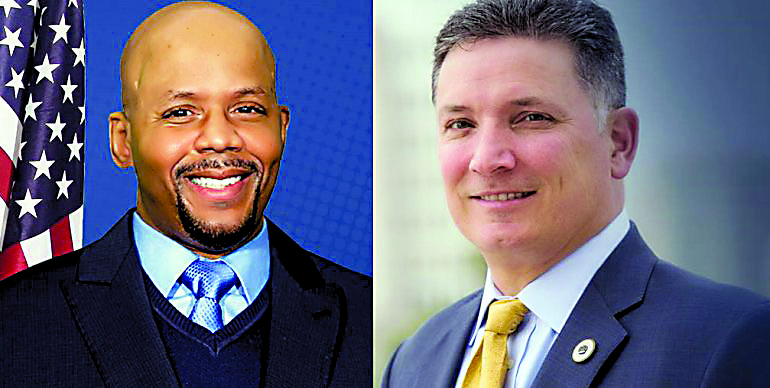 Louisiana’s next treasurer to be decided November 18

BATON ROUGE — As the competition to be Louisiana’s next treasurer enters its final week, the two candidates are sparring over the role of the state’s chief money manager and their qualifications for the job, as they struggle to draw voters to the polls.

Democrat Derrick Edwards and Republican John Schroder have the same problem that has plagued contenders since the start of campaign season: attracting interest to a race that few voters seem to care about when they learn it’s on the ballot.

For those paying attention to the Nov. 18 runoff, the two candidates offer diverging perspectives on the position.
Schroder is a former state House member, Army veteran, ex-law enforcement official and businessman from St. Tammany Parish who resigned his legislative seat to run full-time for treasurer.

He’s running on his legislative record as a fiscal conservative and positioning himself in the same mold as long-time treasurer John Kennedy, a popular Republican who left the job after winning election to the U.S. Senate, prompting the $6 million special election for treasurer.

While Schroder regularly talks about curbing wasteful government spending, Edwards has struck back at the campaign talking point, noting the treasurer has no control over the state’s purse strings, the Legislature does.
“Either he is intentionally trying to mislead the people of this great state or he has no idea what the state treasurer job does,” Edwards told Democrats in a recent speech.

A lawyer who lives in Jefferson Parish, Edwards has never held elective office, though he ran unsuccessfully last year for U.S. Senate. He’s confined to a wheelchair, paralyzed from the neck down by a high school football injury 28 years ago. Edwards describes himself as more fit to be treasurer, citing his accounting and legal degrees versus Schroder’s criminal justice degree.

“This is not about party affiliation, as far as Democrat or Republican,” Edwards said in a recent radio interview. “This is about qualifications.”

Louisiana’s treasurer is the state banker, investing, disbursing and managing the state’s money and its savings accounts. The treasurer chairs the Bond Commission, which oversees state borrowing and debt levels.

Schroder also talks about accountability, but he also said the treasurer can influence state spending through the megaphone of the office. Kennedy spent years in the position as a regular critic of Louisiana’s governors and their budget policies.

“I spent 10 years fighting (inefficiencies and the growth of government). And now I can spend more years fighting it from the treasurer’s office like John Kennedy did,” Schroder said.

The October primary drew a dismal 14 percent turnout statewide. With fewer municipal races on the ballot, turnout for the runoff is expected to fall even lower. And that makes the treasurer’s race more of a toss-up than expected in a conservative state that has rarely elected Democrats to statewide office in recent years.

Though he’s raised little money and done minimal advertising, Edwards is considered to have a better-than-usual shot at a victory because turnout is expected to be so poor statewide and because New Orleans — with its solidly Democratic base of voters — has a competitive mayor’s race that could make it one of the higher-turnout spots in the state.

Schroder, however, remains the front-runner in the competition after Republicans in the six-candidate primary split 67 percent of the primary vote. The most recent campaign finance reports showed Schroder with $171,000 available for spending, compared to $7,800 for Edwards.

The special election will fill the remaining two years of Kennedy’s term. Kennedy’s top aide, Ron Henson, is working as interim treasurer until someone is elected. Henson has backed Schroder.