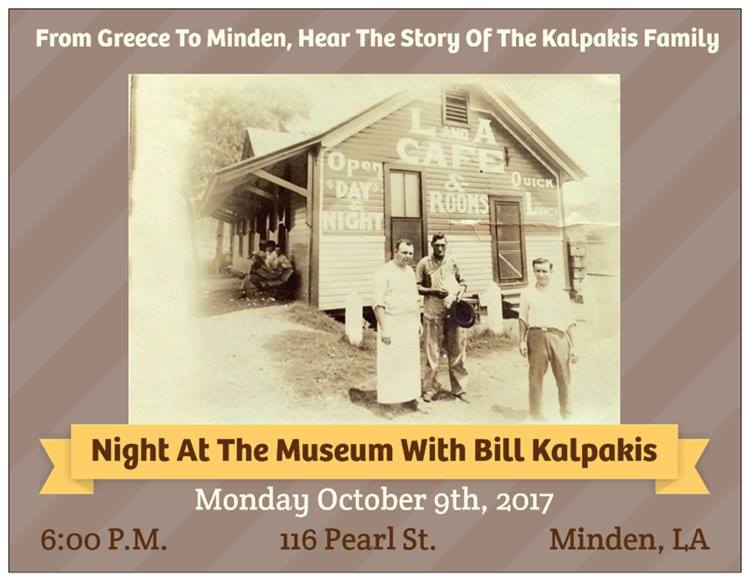 Bill Kalpakis will tell the story of his parents and the legacy they left in Minden at the Night at the Museum at the Dorcheat Historical Association Museum Monday night.
Doors will open at 5:30 p.m. and the program will start at 6 p.m. Admission is free with a potluck dessert or snacks.

Frank Arthur “Pete” Kalpakis immigrated to the United States through Canada around 1912-13. His family lived in a Greek community on the western shore of what is now the country of Turkey,” Kalpakis said. “He arrived in Minden about 1920-21. He married my Mother, who had emigrated from Greece in 1920, in December 1925. They had five children.”

“Pete” Kalpakis would establish several cafes and restaurants in Minden, his most popular two being the HI-Way Café and the Bus Station Café. The Hi-Way Cafe was located on Hwy. 80 across the railroad tracks from the train depot.

Kalpakis fed many WWII GIs passing through Minden on their way to training camps. After he sold the Hi-Way Café around 1949, be bought the Trailways Café across from the present Webster Parish courthouse. He ran that until his death in 1959. Kalpakis was known for this famous “hamburgers” and chicken salad sandwiches. Bill commented, “He taught me how to make a “mean” hamburger.”

“Pete” Kalpakis had very little formal education, but was determined to see that his children got the best education possible. Four children went to college, two graduated with master’s degrees and one with a professional degree. This story will be about hard work and determination of a family that came to Minden with very little but made a lasting impression on many.

The museum is located at 116 Pearl St. in downtown Minden.
For more information contact Schelley Brown Francis at 318-377-3002 or visit www.museuminminden.blogspot.com.