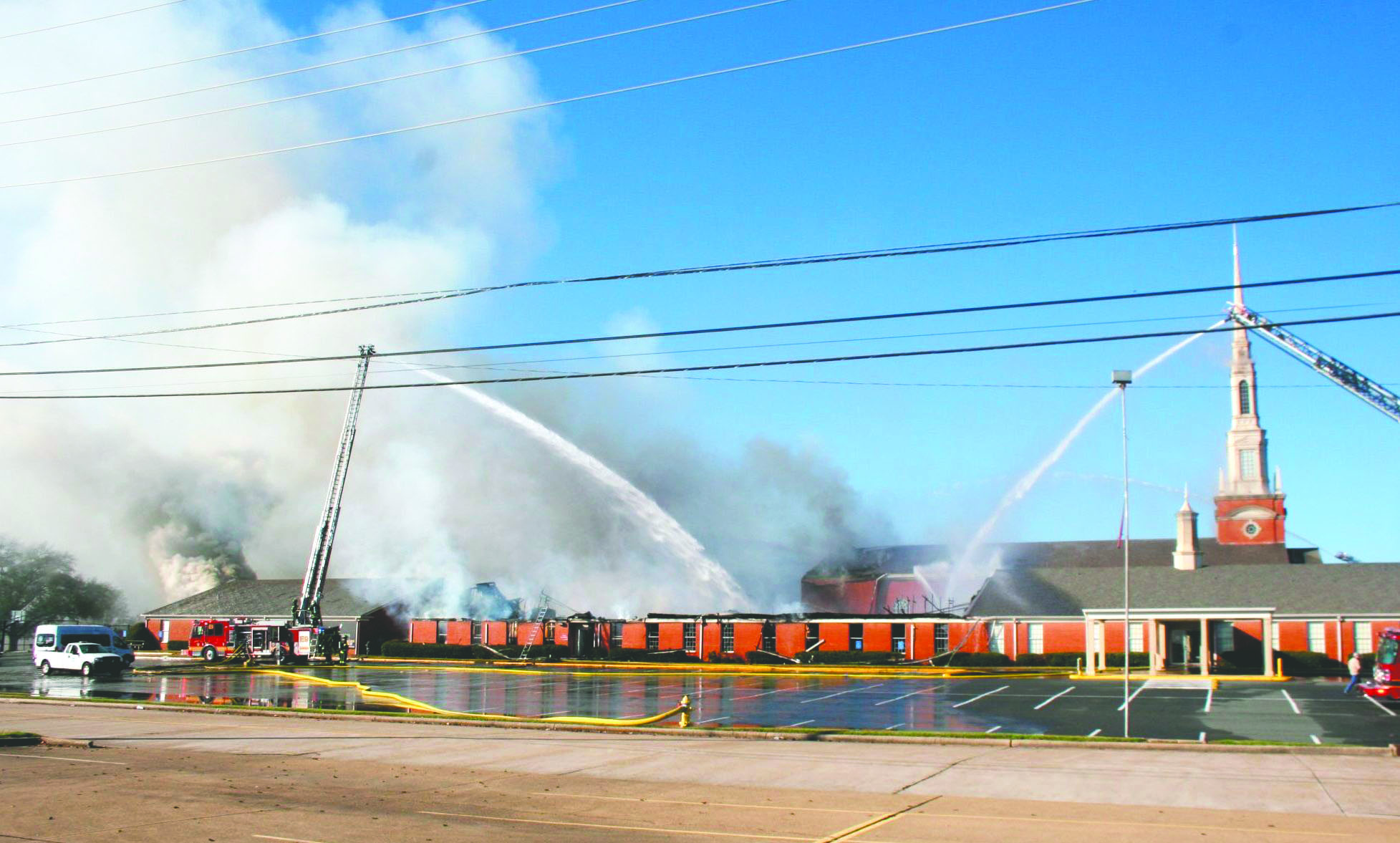 Although large portions of First Bossier were damaged by fire Monday morning, the church’s pastor is staying positive.

Smoke was first reported at 5:30 a.m. at the daycare and youth spaces as well as the old sanctuary section of the church, all of which face Pierre Bossier Mall.

“The fire hit the older parts of our campus, specifically the daycare space which we also use for Sunday School on Sunday mornings. Our old sanctuary (now Faith Chapel), an iconic building on our campus, has also sustained major damage. Our student area/youth building has also been heavily damaged,” said Jurkovich.

While standing in the mall parking lot across from where a portion of his church burned, Pastor Jurkovich was busy counseling members. Some in tears hugged his neck, others just wanted a handshake and commiseration from their leader.

All the while, he remained steadfast and thanked them and everyone else  for their prayers.

“So many people from across the country have already been in touch with us this morning. We are very thankful for the outpouring of support and that there were no injuries. That is a true blessing,” Pastor Jurkovich added.

Several of the onlookers either had current, or past ties to the church.

Robin Sullivan, a member for over 30 years who had her twins baptized and was married in the portion of the church damaged by the fire, said the church’s fellowship couldn’t be stopped by the fire.

“I’m crushed. But this will bring us closer together as a congregation. The rejoice of it is the fellowship of this church will continue. It’s not going to stop.”

Mark Rodie, who used to serve on the staff and attended the church for years, called the fire “sad and surreal.”

“What I’m looking at now is where I was baptized…It’s a lot of memories and ministry. My prayer is this will unite the body of Christ throughout this community and we’ll unite as one.”

And prominent member, Congressman Mike Johnson, issued a statement Monday morning: “First Bossier has such an extraordinary history in our region, and its iconic steeple has been a landmark over Bossier for generations. My wife, Kelly, and I were married in Faith Chapel 20 years ago, and it is very sad to think that landmark may now be changed forever. I do know that the First Bossier family will pull together and recover from this tragedy even stronger than before. The Bible teaches that trials produce perseverance, character and hope, and we believe that to our core. The mission of First Bossier will continue in earnest.”

Both Bossier and Shreveport units responded with 23 Bossier units and 12 Shreveport assisting as of 10 a.m.

As of noon Monday, the fire was contained but units were treating it as an active fire, in what is known as “fire attack” mode. Copious amounts of smoke could still be seen billowing out of the section of the church, blowing down East Texas Street.

There were no reported injuries from civilians. Only one firefighter suffered a minor injury, receiving a laceration on his hand, and has been released.

Due to the fire, East Texas and Beckett Streets were closed.

Bossier City called in some off duty personnel to allow for reallocation of resources around the city.

“With something of this size, that’s part of bringing in those other shifts to come in on duty. We’re shifting some things around to make sure everything stays protected,” said Bossier City Public Information Officer Traci Landry.

Due to the nature of the blaze, the investigation is just now starting to ramp up to determine the cause of the fire.

“We’re starting to interview some eye witnesses and that preliminary part of the investigation,” Landry said.

A major fire also took place at the church in 1984. Starting in the Baptistry, it destroyed much of the church. The church operated in temporary quarters until rebuilding was completed in 1986.