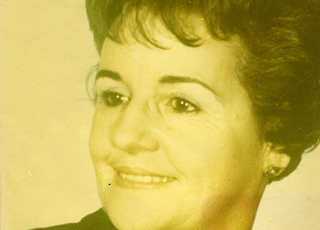 Facebook
Twitter
Linkedin
Email
Print
Daisy Marie Pevy Conaway, age 93, of Dubberly, entered into everlasting life to spend eternity with her heavenly father on April 29. She was a devoted wife and loving mother, nurse, and caregiver.

Services celebrating Daisy’s life were held at Rose-Neath Funeral Home in Minden at 10 a.m. on Monday, May 2, 2016 with her son Gordon Cole officiating and songs by her granddaughter, Dr. Grace Edgar. Visitation was from 5 p.m. until 7 p.m. on Sunday at the funeral home. Interment will follow at Williamson Cemetery in Sailes.

Daisy’s life journey began on May 28, 1922 in Evergreen where she was born to Vashti Black Pevy and Floyd Pevy Sr. She was the seventh of eight children. Her childhood and teenage years were spent on farms in the countryside of north Louisiana. Daisy graduated Dubberly High School in 1941 and married Jefferson Davis (J.D.) Cole of Sailes that same year. She was an active member of Brushwood Methodist Church, volunteered in the community and enjoyed gardening while raising four young children. Daisy became known for her joyful nature, generous spirit and sense of humor.

When the Louisiana Army Ammunition Plant needed workers, she joined the effort. After seven years, the plant downsized and she managed Cole’s Grocery Store in Dubberly. During most of her life, Daisy was a caregiver for elderly parents and other family members with failing health. In midlife she completed training to use these skills and became a licensed practical nurse. She brought healing to residents of Meadowview Nursing Home and patients at Minden Medical Center in Minden.

Daisy faced many challenges on her life’s journey with strong faith and resolve. Her first husband died suddenly in 1968. Later she married Andy Conaway and nursed him for a number of years until he died at home in 1994. During the last few years, Daisy was unable to live alone, so she moved to Colonial Oakes Senior Care Center in Bossier City. There she found a whole new family and friends. The family wishes to express their appreciation to the staff and residents for the loving care taken with Mrs. Conaway. Also to her son and daughter-in-law, Donald and Shirley Cole, who were her primary caregivers.

Her memory will be cherished by her children, Gordon Cole and wife Jan of Springhill, Phillip Cole and wife Mary Jo of Phoenix, Arizona, daughter, Patsy Chalaire and husband Frank of Georgetown, Texas and Donald Cole and wife, Shirley of Bossier City. She leaves behind 15 grandchildren, 19 great-grandchildren and two great-great-grandchildren.
Daisy was preceded in death by her husbands, J.D. Cole and Andy Conaway, her parents, sisters, Clara Cheatum and Sally Johnson, and brothers, Nelson, Mitchell, Charles, Floyd, and Purvis Pevy.