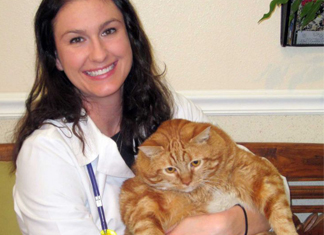 DALLAS — A former 41-pound cat dubbed Skinny has lost more than half of his weight to become the darling of a Dallas veterinary clinic.
Dr. Brittney Barton says the orange tabby she adopted in 2013 has slimmed down to 19 pounds with exercise and a special diet. Barton calls Skinny the “resident cat” at her practice, HEAL Veterinary Hospital.

Barton said Friday that Skinny spends weekdays roaming the clinic. The ex-fat cat’s weekends are spent at home with Barton and her family.

Skinny was found abandoned near Dallas in 2012 and ended up at a shelter. The vet says Skinny just had his annual checkup and is healthy.