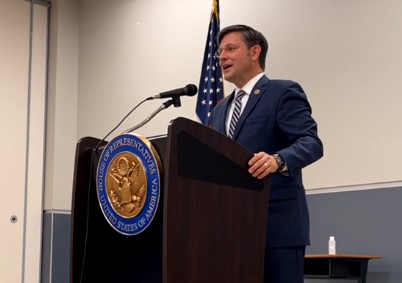 Congressman Mike Johnson visited Northwest Louisiana Technical Community College last Thursday to hold a Town Hall with the residents of Minden, where he provided an update on how things are going in Washington as well as opening the floor to questions from those in the audience. The Congressman spoke on a wide array of topics, including infrastructure, rural broadband, redistricting, and tax reform.

In regards to redistricting, the numbers from the most recent U.S. Census are going to change Louisiana’s district lines. Louisiana’s 4th district, the one Johnson represents, could see some expansion east or south as a result.

“The discussion right now is is our district going to go a bit further east, going towards Ruston and taking some of that population, or the other alternative is to go further south, so you would have everyone from Benton almost all the way to the coast,” said Johnson.

“Some of the other suggestions that have been mentioned is let’s just do away with this whole thing, and just have one North Louisiana District,” said Johnson.

“We’re vehemently opposed to that, and I think everyone in North Louisiana should be. Because let’s be honest, those of us who have grown up in North Louisiana, we’re often thought of as the forgotten stepchild of Louisiana.”

“The legislature meets in Baton Rouge, when big decisions are made in New Orleans. The majority of the population is south of 1-10,” said Johnson.

Congressman Johnson also spoke briefly about the Republicans chances of taking back the House of Representatives in the 2022 midterm elections and was rather optimistic about their chances.

“I project that House Republicans are going to retake the majority in the house in 2022, there’s a lot of reason for that. Historically the first midterm election after a new president takes control of the whitehouse, his party loses on average 20-29 seats.

Nancy Pelosi has a four vote majority on us right now. it’s the smallest margin since WWII, so it’s not going to take much for the republicans to take control of the house,” said Johnson.

He stated that retaking the House would be beneficial for Louisiana in particular, seeing as two of our six congressmen are in the top five leadership positions of House Republicans.

“If that all works out as we project, we’ll be in pretty good shape. Steve Scahlise, in the New Orleans area, is the number two ranked republican in the house, he’s the republican whip,” said Johnson.

“I got elected to the number four leadership position because I’m the vice chairman of the house republicans. So we think this is the first time, maybe in Louisiana history, when you have two of the six of us in a top five leadership position in one of the parties in the house, and if we’re in the majority party that’s really good for us and our district.”

Another topic the Congressman addressed was that of infrastructure, even calling it “one of the last bi-partisan issues we could actually get going on.” While understanding the importance and need on infrastructure for Louisiana, Johnson said he is opposed to Biden’s Infrastructure bill in its current state because not enough of the proposed 2 trillion would be going directly to infrastructure.

Johnson himself stated that only 5% of the allocated monies in the bill would actually go to infrastructure.

“The Louisiana Delegation is all in on infrastructure investment. I believe, from a biblical perspective, there are a couple things God ordained civil government to do. One of them is the defense of the community and the nation, and the other is infrastructure, because it’s larger than any group, body, church community, or a family can do, so it’s an appropriate role for the government,” said Johnson.

“We have not been performing that role well, on state level or a federal level, for a long time. We pushed off taking care of these needs for so long, and the longer you delay maintenance, the more expensive it becomes, and the bigger the problem becomes. So now we’ve got ourselves in a hole … where we have this massive backlog and these huge needs.”

“The republicans, we want to invest, we want to do this right and do it well. But we cannot go along with spending 3 trillion dollars on things that are not related to infrastructure,” said Johnson.

On the same note, the Congressman also talked about the FCC being given 20 billion dollars to expand rural broadband over the next ten years. However, he stated that as of now it is in the hands of private broadband providers to take advantage of the funding.

“We mean real rural broadband, not just the suburbs and big cities, that what happened last time there was federal dollars for it,” said Johnson. “We think Louisiana, by the estimates, there 182,000 locations in the state that would qualify for rural investment, so now we need the private broadband providers to get into the market.”

Mike Johnson is the Congressman representing Louisiana’s 4th Congressional District. More information on the congressman as well as information on how to contact him can be found at the website mikejohnson.house.gov.