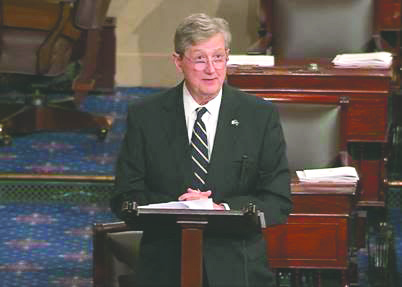 WASHINGTON, D.C. – It has been a little more than a month since President Donald Trump nominated Minden Physician and former 4th District Congressman Dr. John Fleming to be the assistant secretary of commerce for economic development in his cabinet.

On Tuesday, Sen. John Kennedy took to the microphone on the U.S. Senate floor in support of former Fleming’s recent nomination.

“Dr. Fleming has dedicated his life to public service, both as a military veteran and as a four-time elected member of the U.S. House of Representatives,” said Sen. Kennedy.

“He’s run his own family medicine practice for decades, created jobs for hundreds of people in Louisiana and served his country in the U.S. Navy. He’s just a great guy. I’m honored to support his nomination to the Department of Commerce.”

Fleming served as a congressman for the 4th Congressional District from Jan. 3, 2009, to Jan. 3, 2017.
Tuesday’s comments mirrored a statement Kennedy made about the former congressman back in June.

“I can think of no better candidate than Dr. Fleming for the role of assistant secretary of commerce for economic development,” said Kennedy.

“John is a skilled physician and an experienced entrepreneur who has done it all. He’s treated patients, built companies, served his country and been elected to Congress. He’s also a great guy.”