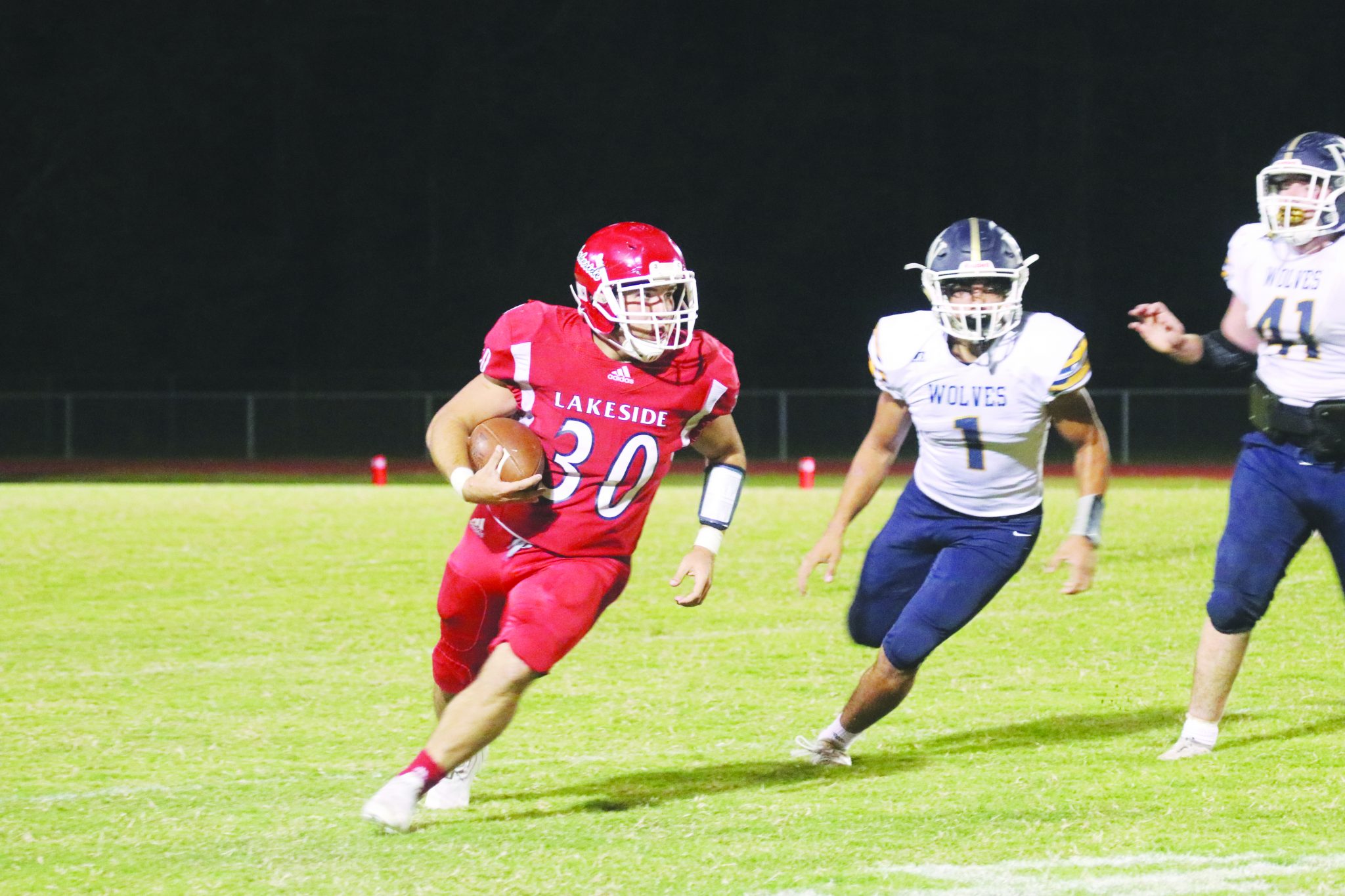 SIBLEY — Friday night’s District 2-1A showdown between Lakeside and D’Arbonne Woods seemed to breeze by as fast as the brisk winds blew across north Louisiana earlier in the day,

But a game based 95% offensively on the run played a big part in that as the clock was stopped only a handful of times following the rare incompletion.

In the end, D’Arbonne Woods downed the Warriors 15-12 in a defensive showdown featuring hard-nosed running and even harder-hitting tackling.

It all boiled down to the last quarter and a half, when the two teams exchanged leads before late defensive stands by the Timberwolves secured the win.

Trailing 7-6 midway through the third quarter, the Warriors threw a haymaker punch in the form of a one-yard quarterback sneak by CJ Watts. But Kris Redden’s two-point conversion run attempt was stopped at the goal line, leaving Lakeside on top 12-7.

Things kept going Lakeside’s way early in the final stanza as D’Arbonne Woods drove deep before the Warriors forced a fumble and recovered it to take back over at their own 16-yard line with 11:11 remaining in the game.

The Timberwolves’s defense didn’t allow a first down on the ensuing drive, and the Warriors came out on fourth-and five from their own 21 with Jacob Whitehead taking the snap in the shotgun formation before attempting a quick kick.

But the punt was blocked and Timberwolves took over at the Lakeside 22-yard line with 9:51 remaining.

The Timberwolves Gavin Rawls took the handoff on the ensuing play and the big running back burst up the middle barely touched on a 22-yard scoring scamper that put D’Arbonne Woods on top 15-12 with 9:45 left on the clock following a successful two-point conversion run.

A short kickoff and solid return by Ashton Stewart set the Warriors up with good field position at their own 48-yard line before a 25-yard pushed Lakeside into the red zone at the D’Arbonne Woods 13-yard line.

But the D’Arbonne Woods defense tightened at that point, thanks in part to a holding penalty against the Warriors, and on fourth-and-eight at the Timberwolves’ 12, Watts looked like he was going to run before quickly stopping, pulling up and lofting a pass toward the end zone.

But the receiver was well-covered and the pass attempt fell to the field, giving the Timberwolves’ possession with 4:53 remaining.

Long runs by Rawls and Timberwolves’ quarterback Regan Walker helped D’Arbonne Woods chew up the clock with a long drive into the red zone.

Lakeside had one last chance to get the ball back with 53 seconds remaining, but the Timberwolves converted and Walker only had to kneel twice as time expired and D’Arbonne Woods escaped with the win.

Stewart scored Lakeside’s other touchdown on a 60-plus yard scoring scamper in the second quarter.

Lakeside, now 3-5 overall and 0-2 in district play, will close out the season next Friday on the road at Jonesboro-Hodge.