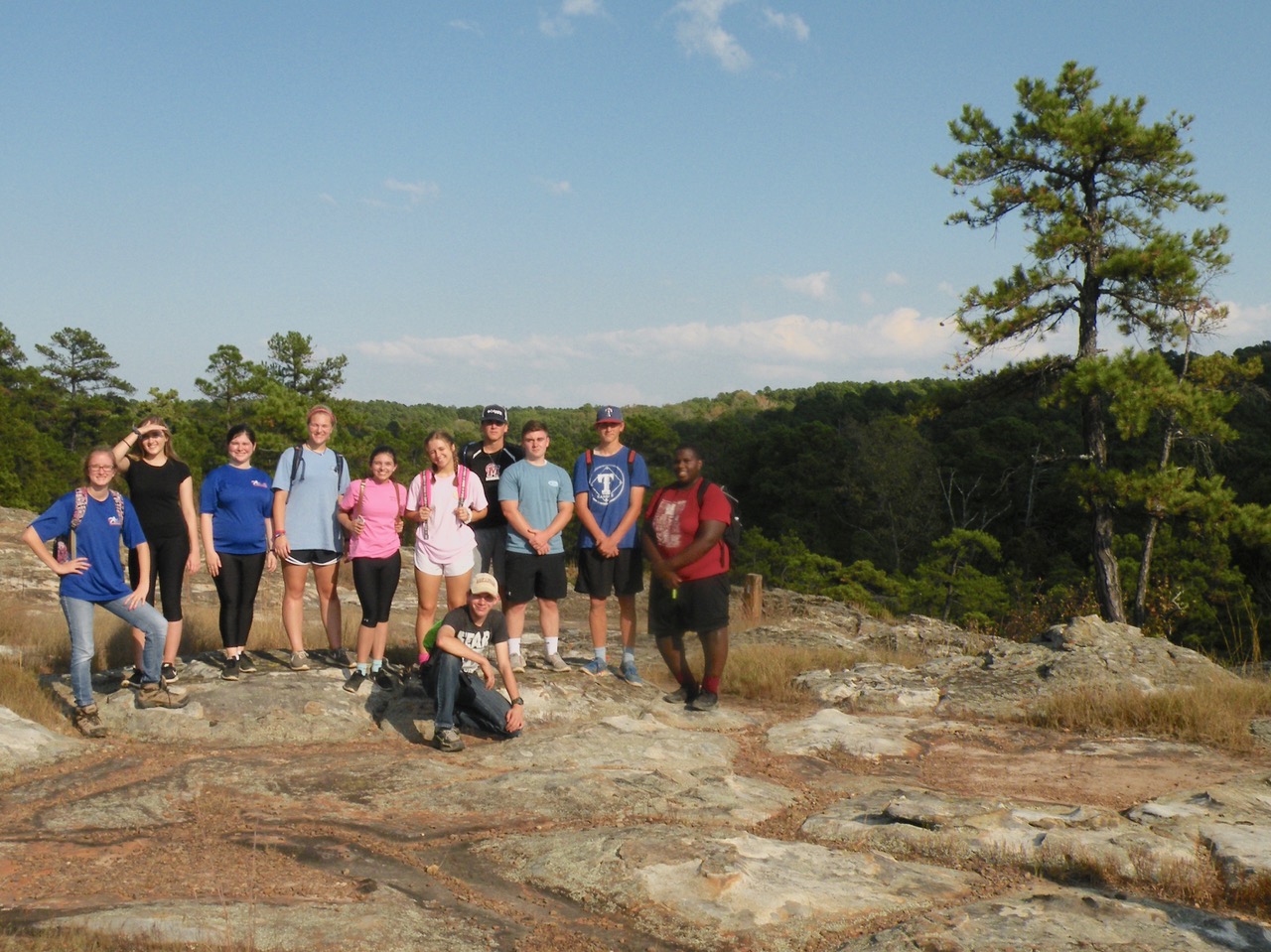 Eleven members of the Minden High School Nature Club visited Petit Jean State Park in Arkansas during the school disrict’s fall break for the club’s sixth trip there. Sponsor and founder John Dillon, a vetern English teacher at MHS, took the students there with help from former MHS math teacher and club sponsor Kim Stanberry and MHS alumnus and former club member Stephanie Foster Wilson. The club members enjoyed hiking, rock climbing, and scenic views of the sunset over Cedar Creek Canyon and sunrise over the Arkansas River Valley. When asked about the trip, seniors Katelyn Foster and Mary Claire Boothe, both active 4-year club members and this year’s co-presidents, said that the annual trip is a highlight for them. “It’s so much fun,” Boothe said. “It’s really hard to describe how great it is to be there and see the scenary and everything. Nature Club is going to be one of the thing I miss most about high school.” Both seniors expressed some sadness over their last trip there as club members but said they hope to go back with friends from college next year. “It’s one of my favorite trips we do, and she and I have both gone all four years. It’s a really incredible trip, and I think we’re really lucky to have a club like this,” Foster said. When asked about the club’s history and their annual trip to Petit Jean, Dillon said, “I actually have to thank Mrs. Stanberry for coaxing me into taking the kids there back in 2011. We’ve been going ever since.” Concerning accomodations, Dillon said, “This is the second year in a row we’ve stayed at a church camp there. They have cabins and a full kitchen with breakfast, lunch, and dinner, a gym, a ropes course, and several other features. We’ve also stayed in the park’s yurts, but they sell out fast. We had to give up tent camping because every year we did it, we’d bring on some sort of meteorological anomoly – a day with a zero per cent chance of rain would end up with a torrential downpour. Kim [Stanberry] pointed out to me this year that every year we’ve stayed in cabins it hasn’t rained at all. Murphy’s law, I guess.” Principal Becky Wilson commented that the Nature Club is one of the most popular clubs at Minden High and usually has over 40 paid members every year. She also added, “It’s very important to Mr. Dillon that his club members not miss any school because he believe school comes first. So, in 11 years of running the club, they have not missed a single day of instruction even though they’ve been all over the state and to Texas, Arkansas, and Mississippi.” It shows how much the kids love it to give up their weekends or breaks to go on the trips, and it also shows how much some of our teachers are willing to sacrifice to provide opportunities to our kids that they might not otherwise get.”