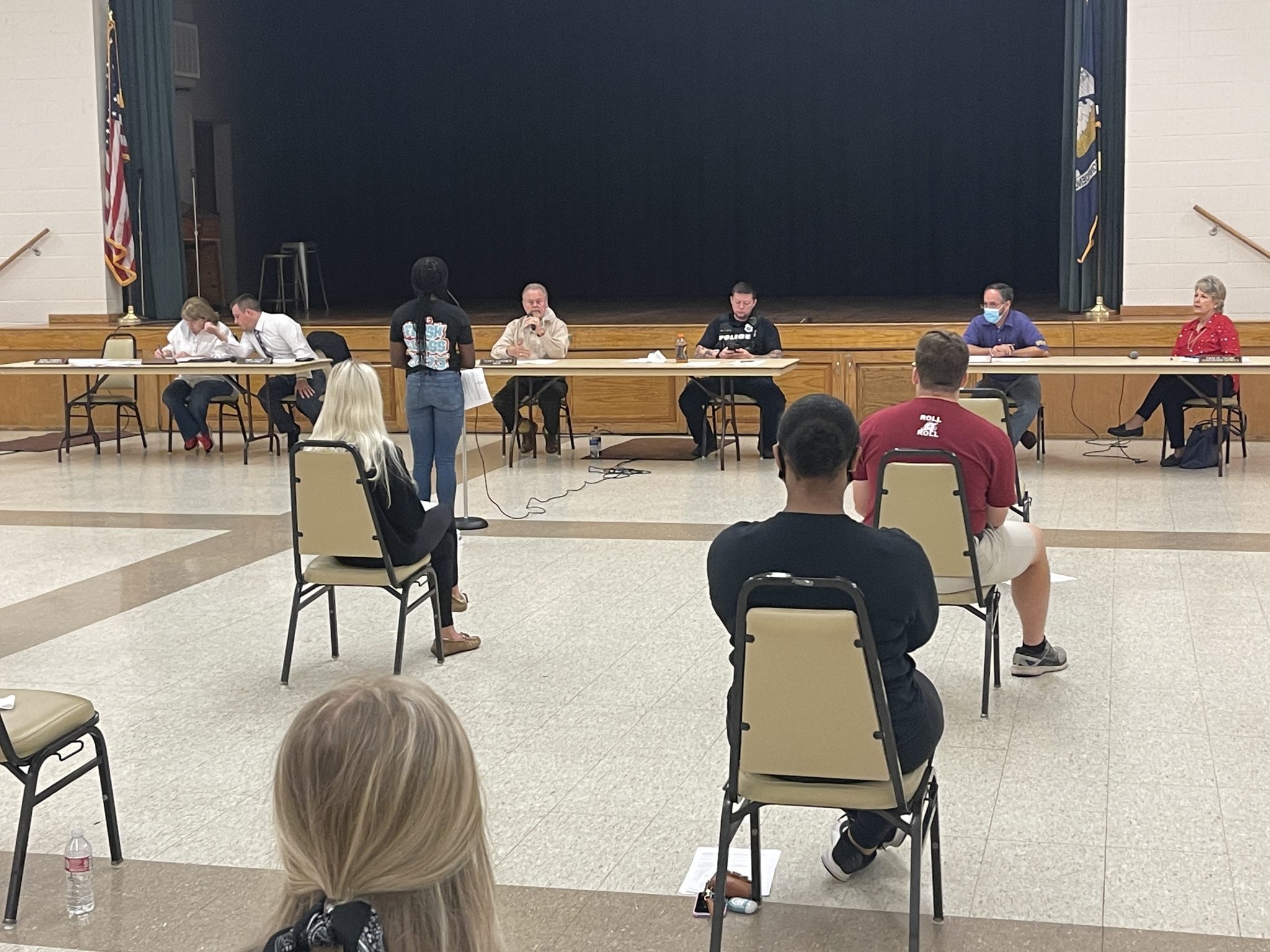 Friday morning the Minden City Council, Mayor, City Attorney, and President of the Minden Police Association met with Minden High School students and members of the community in the Civic Center for a workshop to discuss the juvenile curfew ordinance that could be potentially passed soon in the City of Minden.

Students were encouraged to ask questions to gain a further understanding of the ordinance, its intent, and how it will go about curbing the rate of crime.

One of the initial questions one of the MHS students asked was in reference to why the curfew had been reduced to 10 p.m. from the initial 11 p.m. curfew when the ordinance was first proposed.

President of the Minden Police Association Jason Smith answered, “That’s something that came out of the safety initiative program meeting. Some of the members thought that 10 o’clock would be a little bit more beneficial than 11 o’clock, unless you’re doing one of the activities that says you’re allowed to be out past that curfew.”

After replying, he then went on to ask the student what she thought of the 10 o’clock curfew, to which she explained that taking part in competitive cheer and softball in Shreveport, though not through a school, and it leads her to get back into town past that time.

From her response, Smith and City Attorney Kimbo Yocom agreed that more specific language could be added to the exceptions tab to cover situations such as these, where students’ extracurriculars aren’t explicitly managed by the school they attend.

“There can definitely be language added in there for those types of extracurricular activities or events that are outside of school,” clarified Yocom.

Another student asked that if the curfew were to be adopted, how would officers apply this curfew equally across the town of Minden?

This question led to some nuanced discussion about the selective enforcement of laws by officers, as well as how the demographics and businesses that reside in certain parts of town could skew the data.

“Are we going to target one neighborhood over another neighborhood? Absolutely not, that’s not our intent. Our intent is to prevent victims of crime or perpetrators of crime, and that’s covered in all areas of town,” said Smith. “I’m here to tell you it’s a problem all over town, not just in one specific part of town.”

From there, Yocom went into the topic of selective enforcement, clarifying that officers are expected to properly gauge the situations they are presented with, and then can use their judgment on how best to apply the law in that circumstance.

“Every law has the ability to be enforced selectively, whether for good or for bad, and that requires officers to be able to gauge the situation,” said Yocom.

“A lot of times we think it’s automatically bad to apply the law selectively. Everyone thinks that until the cop pulls them over for speeding, and the officer decides to let them off with a warning.”

“Our officers have to be able to gauge the situation, and from what I’ve seen do a great job of that.”

Yocom explained that officers will be able to differentiate a student out a bit past curfew coming home from a school function or sports game versus a group of hooligans up to no good.

“If they pull over a 16 or seventeen year old student coming home from a softball game or sonic or whatever, they can say, ‘look you need to get home.’ If they pull over a car of people, and when they walk up there’s five 16 to 17 year olds in there, and it smells like cigarette smoke,  there’s alcohol in the vehicle, or they are being disrespectful and loud, that lets the officer know that this group of guys or girls are probably out acting a fool, up to no good,” said Yocom.

He then went on to further clarify why offenses for being out past curfew won’t be even throughout all districts of the City of Minden, stating up front that there will be discrepancies from each district.

“You will see disparagement and enforcement from district to district. And that’s not a result of the cops picking and choosing where to enforce, a lot of that is a result of the age of the people. District E, is more of a retirement area, a lot of people there don’t have kids. So if you say there’s not as many curfew violations in District E as opposed to District B or C or D, of course there’s not, because not as many 16 year olds are there, said Yocom. “So you have to look at the demographic of the community, how many young people are in that area, what is in that area.”

Another student later asked how we expect the curfew to prevent illegal activity from happening?

Being frank, Yocom was upfront in saying that there is now law that can be passed to prevent crime, only reduce it.

“The word you used is prevent. There is no law we can pass to prevent crime from happening. There’s no magic wand. There’s no secret sauce … or anything like that. But these are all tools in the toolbelt that officers have to be able to get crime down,” said Yocom.

He further explained that currently there is no mechanism in place that allows officers to enforce children being out late, explaining, “If an officer finds a ten year old riding a bike down the street at 2 o’clock in the morning, and he says, ‘hey can you go home,’ the ten year old in theory could say I don’t have to do anything because there’s no law against a ten year old being out.”

Another good question asked during the meeting was how exactly the child would get home. Officer Smith explained that they will do whatever is easiest to make sure that that child gets home safe.

“We can do that,” Smith said, referring to taking them home. “We can bring them to the police department, or we can call the parents to come pick them up. Whatever is the best mechanism for us, because once we make contact with and we determine they are out past curfew, now they are in our care, sowe have to make sure they are being safe.”

One of the last questions regarding the topic of the curfew was that of whether the punitive measures could put unintentional hardships on parents with especially disobedient children, with a 500 dollar ticket being imposed on parents whose kids are out past curfew.

Smith and Yocom explained that in situations like these, the child could actually be charged with being ungovernable, which is a law meaning that children aren’t actually able to disobey their parents, and can be sentenced to doing community service on the weekends.

“We don’t want to put any hardship on any parents, the punitive measures are for the parents as an incentive to make the parents know where their kids are at,” said Smith.

Yocom added, “Our goal is not to punish the parents because they’re kid is bad, otherwise we’d be locking up nearly every parent in town.”

“I’m the one that prosecutes this, and I will say this on the record. If any parent comes in and they are telling me, ‘look, I’ve done everything I can, this kid is bad. I’ve grounded, I’ve taken away phones and keys and stuff,’ and I look over and the kid sucking his lips … we’ll charge him  with what you call ungovernable, meaning its a crime to disobey your parents, and he’ll be the one doing community every saturday, not momma or daddy just because they’re kid is going through a phase.”

“But we do need to have something in here for the parents … those that are simply disengaged, and they don’t care if their 15 or 16 year old is running around at 2 o’clock in the morning acting a fool.”