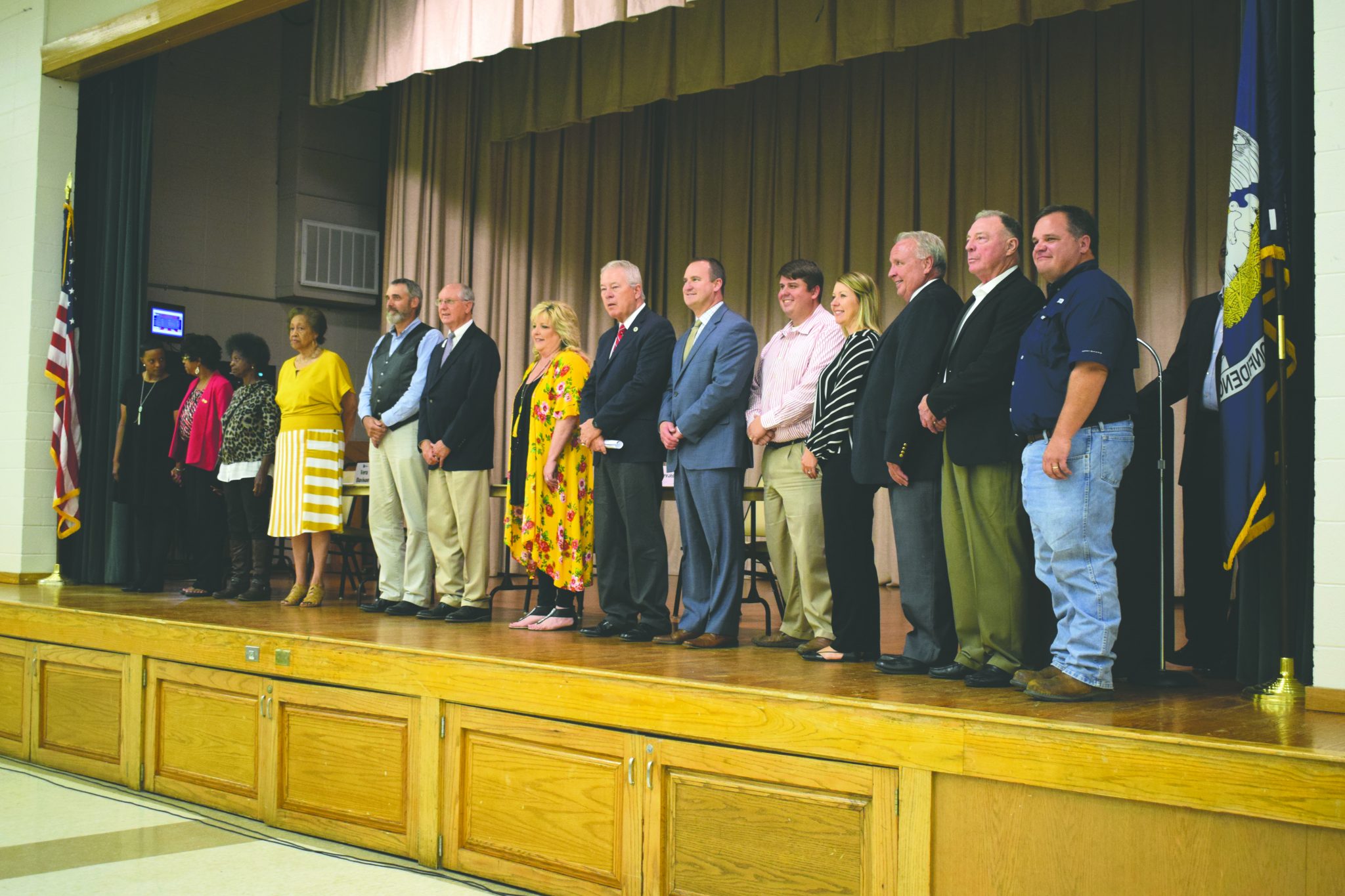 The Greater Minden Chamber along with the City of Minden held a Political Forum Tuesday evening during which candidates were asked a series of questions to provide the citizens with some insight into their stances on a variety of subjects. Voters heard from potential State Senators, State Representatives, Sheriffs, District Judges, Clerk of Courts, Tax Assessors, and Police Jurors.

The first group up for questions where those running for State Senate. The present candidates were Ryan Gatti, Robert Mills, and Mattie Preston. The moderator for the event Larry Gipson, and he asked the candidates, “What do you think the biggest problem Louisiana faces with k-12 education?”

State Senator Ryan Gatti said, “K-12 Education, you have to view it as a pipeline. It takes kids from poverty, and in 13 short years, it gives them access to prosperity. It’s one of the few things that we invest in the state that actually allows this to happen. The biggest problem that we’re facing with K-12 right now is there are forces that want to underfund it so kids can’t move from poverty to prosperity. I’ve done everything I can to expose that and show that when people start talking about rewriting the constitution, that the only in the constitution they want to rewrite is the money dedicated to K-12 schools, and I can’t imagine having Mr. Rowland as Superintendent go down to Baton Rouge and beg and plead for his money. We protected that money so he wouldn’t have to do that.”

Mills took an approach of recognizing the importance of the education system but emphasizing why it’s important to improve that system.

Robert Mills said, “Well I agree that the K-12 education system is an integral part of getting our workforce prepared. It’s step one, but we’ve got to get a better process, a more unified process of running the systems hand in hand. There’s technology, there’s training, there are improvements in education that have got to be implemented. We’ve got to get control of this system, and I think management is the key, and we’re just going to get a superintendent that we like, that we appreciate, that we stand behind and we’re going to support these teachers as they do their job and keep pushing for more certified teachers.”

Mattie Preston stressed the importance of ensuring that those who graduate are equipped with a skill set that will allow them to succeed.

“K-12 is important because there are young ones who come from a home where they don’t have education stressed, or they aren’t read books or don’t have books in the home. We are graduating students from high school who can’t read, and that is a travesty. When they get out of high school and they can’t read it’s hard for them to get a job. I’ve substituted some of those students and I see them now on the outside and they’re not working. We need to look at that and confront that and find a solution for that. The education in this country I believe is good because it’s free, and if it wasn’t free a lot of students wouldn’t be able to get the education that they get right now,” said Preston.

The next group that took questions were those running for State Representatives. Those present were Wayne McMahen and Creighton Wilson. Gipson asked them, “What is the most important thing facing our state, and how do you propose to address it?”

Creighton Wilson said, “Roads and bridges are probably the most important things that are facing our state. The economy of the state is so tied to roads bridges. The highway 371, I know there’s been some work done and stuff like that, but we just gotta get back and do more. I would love to see I-69 come on through here, a bridge down by Elm Grove, so the timber trucks can get to the paper mill over there. Can you imagine the housing that would begin to come in if we had a bridge? I could see housing I could see jobs, I could see the economy flourishing, so some of the biggest things that we gotta do is back up our road systems and bridges, where we could then begin to stimulate the economy.

While Wilson emphasized infrastructure, McMahen instead chose to address Louisiana’s healthcare with his answer.

“I think healthcare is one of the things we gotta address in Louisiana. Half of our state’s budget goes to healthcare. That’s a huge number. The advent of Medicaid has been good for a lot of things, but it has put us in a posture that we’ve gotta do a better job. We’ve got to make sure that people who are qualified for Medicaid get Medicaid and those that are not qualified do not receive. They’re taking away from people who need it when we’re letting people that are making $75,000 to $100,000 a year qualify. We’ve got to look at preventative care. We don’t need to be seeing people in the emergency room when they’ve been sick for five or six days. We need to get them to a doctor on a regular basis. For right now with the amount of money that we’re spending in our state on healthcare, I feel like that’s the primary thing we need to do,” said McMahen.

After the candidates for State Representatives finished their closing statements, the forum went on to spotlight the District Judge Candidates, or rather candidate, given that Charles Smith was the only one present.

While his time on stage was brief, Smith did take time to address his views on the court system, after Gipson asked whether he believed the current court system was working.

“I think the system is working. I’ve had people come up for jury, I picked a jury yesterday. and granted I know most people don’t like to come to jury duty, but I have never heard or seen a better system than getting 6 or 12 members of your community to make a decision on your actions. So to me, the system works fine,” said Smith.

Next up were the candidates for Webster Parish Sheriff, the present ones being Jason Parker and Lil’ Don Smith. They were asked by Gipson, “What is the biggest need of the Sheriff’s department?”

Parker said, “Well, there’s always room for improvement. I think one of the biggest things that we can bring to the table is training and continued training. I believe that well qualified and trained deputy out there is doing a lot better not only to serve the Sheriff’s Office but also to serve the citizens.”

While Parker focused more on training, Smith instead chose to focus on morale as his key concern.

“I believe that our morale is really low right now. We have to look at the pay the guys are making and also try to give them incentives to stay. I think we should allow them to take a physical fitness test and if they can pass it, they get paid more money upfront,” said Smith.

Webster Parish Clerk of Court candidates were the next ones to take the hot seat. Those candidates were Holli Vining and  Tina Douglas. When asked “Why should the people of Webster Parish vote for you?” by Gipson, Vining responded, “Because I’m the experienced candidate. I’ve served 15 years as Clerk. Served in the office for 29 years. I’ve made a positive impact on the office. I’ve made a number of improvements in the office. Some of you have probably used some of our new services. The preservation of your public records is important to me, and I will continue to work to take care of your office.”

The candidates for Webster Parish Tax Assessor present were Hugh Wood and Denise Edwards. They were asked by Gipson, “What do you feel is the most important responsibility of the Parish Assessor?”

“I think the most important is fairness. When you’ve been in office for a long time, you can get complacent about stuff, so I think you need new brighter ideas in there to go an make sure everything is fair. I know to date at the assessor’s office everything doesn’t get assessed as it should be, and there’s a fine line to walk there on what should be done, but it helps the economy of the whole parish if everything is assessed properly,” said Wood.

The most important job of the assessor is to make sure that your tax roll comes out fair and equitable and that your tax dollars go where they need to be. If that tax roll is not balanced, and those millages aren’t approved, then we don’t have the money for our roads and our police and our schools and all the services that we all rely upon. That’s what I believe is the most important job,” said Edwards.

The final group that were brought up for question were those running for Police Jury. Those present were Jerri Lee, Vera Davison, and Benjamin Jordan.

They were asked by Gipson, “What would you like to see done in your district?”

Davison said, “I live in the J.E. Phillips area. Down on the end, it floods. I would like to see that worked out some kind of way. The main thing is when it floods down there, those people’s houses floods. If it rains through the night, I get up in the morning, and I’m getting in my car with my pajamas on to see if those people’s houses got flooded. I have done that ever since it’s been flooded. I’ve been there for them, and I will still be there for them.”

Jordan used his response to tackle the issue of roads in his district, as well as certain regulations pertaining to homeowners.

“In the 12th district, we have a serious road issue with heavy trucks because of the chicken houses that have been built. Also, having to get a permit to put a shed upon your property. This is the United states of America, we’re a free country. You shouldn’t have to go ask the government to put up four posts and a roof and then have to pay for it on your own property,” said Jordan.

Jerri Lee responded by stressing her continued support of the services the Police Jury provides through their Office of Community Services.

“For us to continue to get the services that we are offering our citizens through the Webster Parish Police Jury Office of Community Service. I would like to see us expand and continue to work with the 311 students that we serve. I’d like to see the transportation services continue because it’s vitally important to the people that we serve. Also, our home daycare people, I’d like to see them continue to receive the services that we offer to them. As well as the energy assistance that we offer through our various programs. We’re doing a pretty good job and we want to continue to see improvements in our communities,” said Davison.