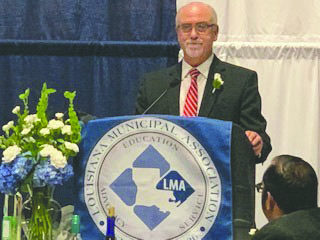 The Louisiana Municipal Association (LMA) has recently elected Jimmy Williams, mayor of Sibley, to be their new president.

When asked about how he felt being elected to his new position, Williams said “I kind of consider myself a figurehead. We have a staff of LMA experts, and those people are the guts of the organization. We rely on them so much. I’m called the president but they do all the work.”

After he shared his thoughts about being elected, Williams went on to describe how he would use his new position as President. “I’m not going to do anything different. Why would I go in there and change something that’s not broken? If there’s something that’s not working well, we’ll look at it, but right now all of our programs are hitting on all eight cylinders,” said he said.