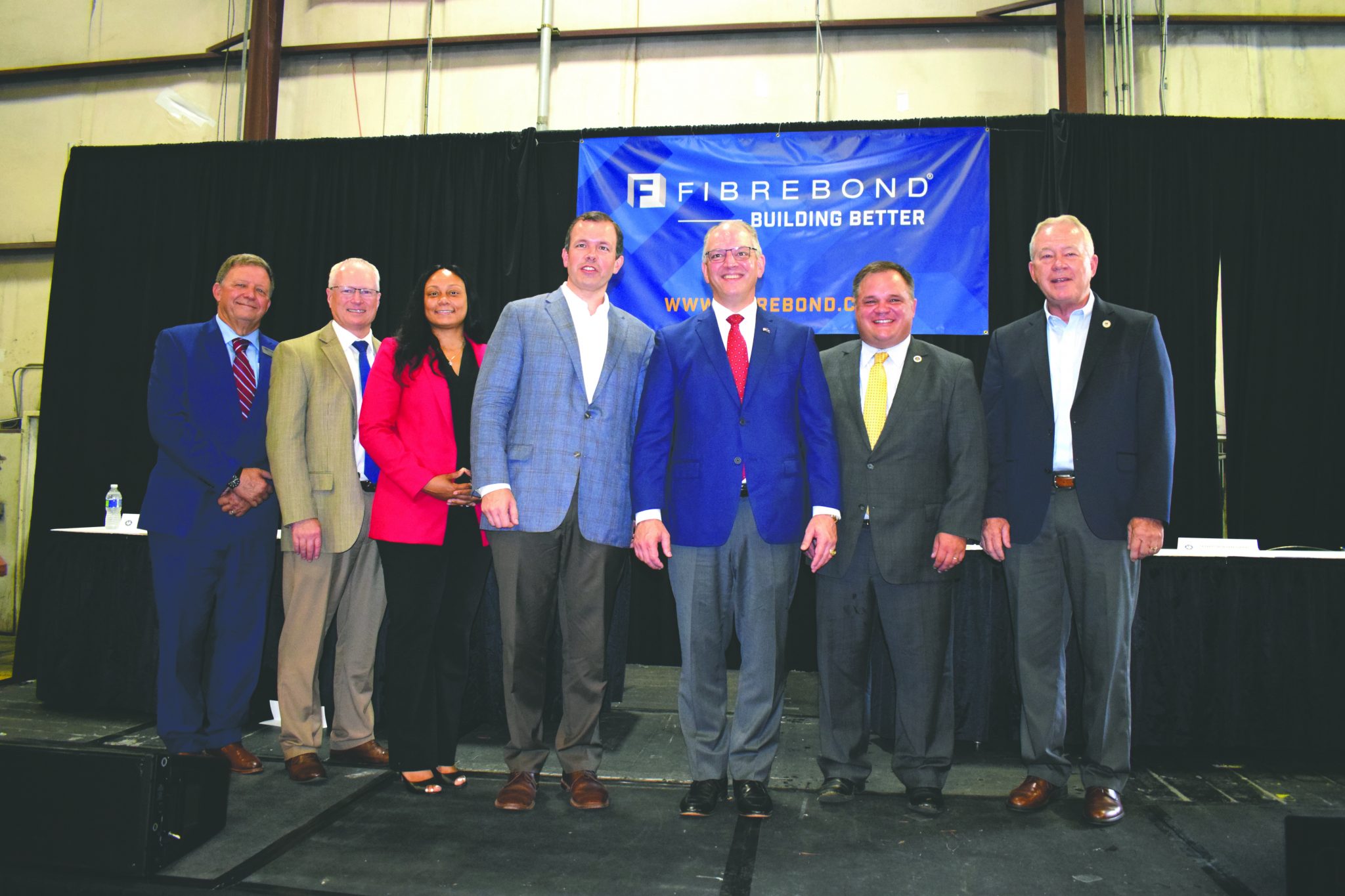 MINDEN — Thursday morning, the employees of Fibrebond Corporation, government representatives, members of the community, and Louisiana Governor John Bel Edwards met at Fibrebond in order to formally announce Fibrebond’s decision to stay in Minden and provide details about the agreements the State of Louisiana made regarding infrastructure and other investments in Northwest Louisiana.

The announcement began with some encouraging words from Walker which stressed why he believed it was so important for him to keep Fibrebond in Minden. “Northwest Louisiana is a key part of our strength. It’s who we are, it’s what we do, it’s where we are from. The work ethic here and the quality of people that we can find here is unparalleled, second to none. I don’t care what anybody says,” Walker said.

“So, as we have said all along, we have been fighting to stay in Louisiana, not fighting to leave, and that’s on behalf of 700 people here this morning. So thank you again for your fight in this and your dedication to trying to keep us here in Minden, Louisiana.”

Soon after Gov. Edwards took the stage, providing more details into the steps Louisiana is going to towards their investment in Northwest Louisiana’s infrastructure. “For starters, the Department of Transportation and Development will establish a heavy haul route from Minden to Texas for over overheight and overweight loads, and as I stand here and look out at what you’re building here, its obvious why that’s important, Graham,” said Edwards.

“This is going to provide more than 50 miles of Highway that can accomodate these special loads and help business get done across the region. In order to do this, the DOTD will lower the US 80 underpass at I-20 between Dixie Inn and Goodwill Road, and both eastbound and westbound, so the new minimum vertical clearance will be seventeen and a half feet and will accommodate Fibrebond delivery of these custom built structures that you are very famous for providing for industrial customers around the country.”

On top of that, he went on to say that the westbound U.S. 80 bridge over Boone Creek near Dixie Inn will be removed and rebuilt. “The new bridge will be 80 feet long, longer than the existing bridge, and it will be better suited for handling heavy loads for many years to come,” said Edwards.

“In addition, DOTD will begin a comprehensive replacement program for eight West Louisiana bridges over the next few years. I’m excited to tell you that in addition to our normal highway priority program over the next three years we will have at least $100 million dollars more for rural bridges across Louisiana.”

LED is also committing $2.5 million in Rapid Response funds for DOTD to help with the speedy completion of these improvements. That funding will support the major work DOTD is completing, using in-house materials and resources.

Not only did Edwards talk of investments into Northwest Louisiana’s infrastructure, but he also went into detail about the plans to invest into Northwest Louisiana’s higher education. “The second key component of this has to do with workforce. We’re going to launch some training efforts that will have far reaching impacts for many of this region’s economic driver companies. So the Department of Economic Development and Louisiana Community Technical Colleges will provide important funding and other resources for Northwest Louisiana Technical Community College, to provide more graduates who are equipped with the skills and knowledge necessary for local industries,” said Edwards.

“When we invest in education, and our community technical college system, we know we’re investing in our people, and in turn that’s going to produce additional investment here in Louisiana.”

After Edwards was finished with this announcement, the Meador took the stage to say a few words and express his appreciation. “If we were not willing to change with you and your business, we would not be relevant to producing that workforce that is needed to grow our community,” Meador said.

Walker and Edwards both praised Gatti for his efforts in securing Fibrebond’s future in Minden, leading up to Gatti’s remarks.

“I have a special gift for Graham Walker today,” Gatti said as he announced a special presentation. “We flew a flag at the state capital in honor of Fibrebond and the Walker family,” said Gatti, and that was the very flag that they presented to Walker.

Gatti then went on to describe the story behind the State flag, and its relevance to Fibrebond’s decision. “So on our state flag there is a momma pelican, and the story goes that the momma pelican has these three babies on her flag, and she has to go out to the swamp,” Gatti said.

“She’s looking for food for those babies and she doesn’t find any food. So she goes back to the nest and begins to she plucks her feathers and breast meat to feed her babies. It’s a picture of the word sacrifice. There’s three drops of blood and what they mean is that sometimes it hurts to sacrifice and sometimes decisions aren’t easy, and (Graham Walker) made a tough decision. The reason Fibrebond is so successful in our area is because they sacrifice. They made the hard decisions decades ago and just yesterday, to make sure that you could have a place to work and that we could have a place to be proud of. I specifically want to thank Graham Walker for staying, and let’s give them a huge round of applause for being mama pelicans for Minden, Webster, and Northwest Louisiana,” said Gatti, and a round of applause was received.