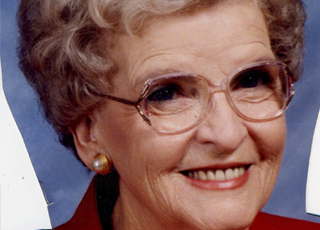 Facebook
Twitter
Linkedin
Email
Print
Mrs. Johnye M. Madden passed away quietly at her home on Jan. 26, 2016, after a lengthy illness. She was surrounded by beloved family and “sitters” who had cared for her in her home since 1999. Mrs. Madden was born June 19, 1919, and was 96 years old at the time of her death. The family will receive friends for visitation at the Rose Neath Funeral Home in Minden, on Friday, Jan. 29, from 4 until 8 p.m. A memorial service celebrating her life will be at 10 a.m., Saturday, Jan. 30, in the sanctuary of the First Baptist Church in Minden. Following the service, Mrs. Madden will be buried at the Bistineau Baptist Church cemetery in Heflin. The family will receive friends at her home at 102 Willow Creek Drive in Minden following the burial service.

Mrs. Madden was a long time resident of Minden where she was well known for being attractive, kind and hard-working. Those who knew her well simply called her “Mrs. Johnye.” She was frequently seen with her sister, Cortez Daniel, who was often mistaken as her twin. She gave of her time generously as she served on many committees at First Baptist Church where she also taught Sunday School for over 50 years. She was a founding member of Madden Contracting, Inc. , a family firm, where she was employed until her retirement at the age of 79 years. She was a devoted mother, grandmother, and great-grandmother to a large and loving family. She was simply known as “Ma-Maw” to the grandchildren, and was a strong and giving presence in their lives. She will be greatly missed.

The family would like to thank Mrs. Madden’s physician, Dr. Alan Borne, for his attentive care during her lengthy illness, and the kind, professional staff of Regional Hospice, for their loving care during the last months of her life. The family is deeply indebted to the “sitters” who provided 24 hour care for Mrs. Madden for so many years. Over the years, the sitters included Patricia Harper, Winnie Hall, Mattie Landfair, Ruth Tanner, Becky Waltman, Lucille Womack, Lisa Edwards, Sandra Stone, Pamela Kirkpatrick, Joyce Thomas and Barbara Wright. They loved her, and she loved them.

In lieu of flowers, the family would ask that gifts be made to the First Baptist Church of Minden, for the benefit of their mission program or the Baptist Children’s Home.