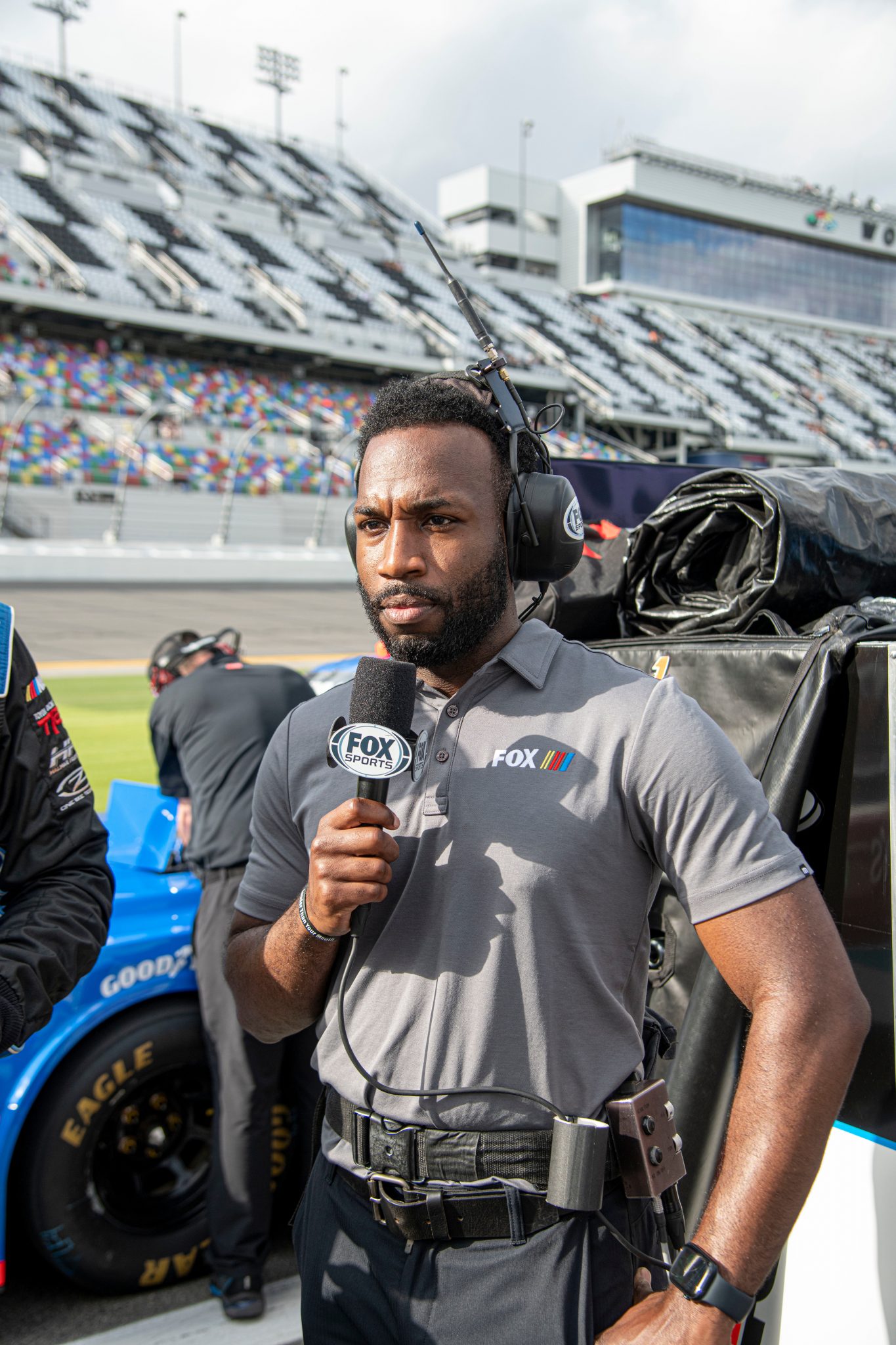 Josh Sims, the son and grandson of Minden natives, has made news recently for becoming the first Black pit reporter for NASCAR. While Josh was raised in New Jersey, he treasures his memories of spending summers in Minden with his brother, Jason, his mother, Gloria Bell Sims, and his grandparents Sylvester and Naomia Bell.

“When we were kids growing up, me and my brother and my mom and dad would go down there, basically for an entire month around August every year, and spend time with my grandparents, my uncle, and my cousin,” Josh said. “To be able to go down to Louisiana every year and be immersed with your grandparents and your extended family was just really cool and eye opening for me. And it was the simple things that were really fun, like going out to eat with them or hanging out at the house watching movies. Doing simple stuff with family—having picnics, going to church. I mean, all that stuff was just really fun for me. Just getting to spend time with them really meant a lot.”

Josh was always athletic and enjoyed sports, but he also loved writing. “There’s two things I was big on growing up: I was always into sports and I always loved writing. I had a little notebook, and I used to write these make-believe stories and just kind of jot stuff down,” he said. “And I actually did a lot of that writing when I was in Louisiana during summers. I knew—when I didn’t grow to be six foot six and wasn’t going to make the NBA—that I needed another career path. And I was always into sports and I was always into writing. With that, covering sports journalism just seemed to go hand-in-hand.”

“Now, I didn’t think I was going to go the TV route,” he continued. “That came later in life after I did a couple internships at a newspaper and a radio station and kind of figured out exactly what I like about the industry and what I didn’t. And then, going into my senior year, I was unsure of what I wanted to do next. I knew I liked journalism, and my parents really encouraged me—’Hey, why don’t you take a shot at TV? You’ve talked about it before, but you’ve never really went for it.’ So, I took the GRE, and I applied for grad school, and the rest is history.”

I asked Josh if he had any advice for young people today who seem to be focused only on sports as a career goal, and he said, “I think the most important thing is to have a backup plan. Yes, we all want to encourage people to go for their goals and work hard to achieve something—and, in a sense, don’t let anyone tell you what you can’t put your mind toward—but you do have to be realistic and look at the numbers and how rare it is to actually make it big. I think the important thing is for those young people to see people in other fields—for young Black men and women to be able to see doctors, lawyers, broadcasters, dentists—all these things so they have something to strive for, because what is glorified is athletes.You see them. You see them on TV. The money, the fame, everything like that, but what we don’t see is the others out there that are just as successful or more successful, but who don’t have that platform. I think it is important for those young Black men and women to see that, so they know it’s attainable and there’s other options.”

When asked what was the most interesting part of working as a pit reporter for NASCAR, Josh said, “I think the part that interests me most is just the live-reporting aspect, because every race is just packed with so many storylines, so many different things going on that it’s just really interesting to go into a race and have these ideas:  this driver runs well here, this driver doesn’t, this driver may have some kind of beef that’s left over from a season ago or several seasons ago. You’re watching it all play out in front of you, and the pace at which it happens is just really compelling, because things change at the drop of a hat, and a lot of these kids—especially in the Truck Series—are so young that you’re getting to experience one of the biggest moments in their lives up until a certain point. And all of that stuff, coupled together—-the race, the storylines, the live feed, the aspect of watching things happen—really intrigues me, and it’s really fun to be a part of that and help tell those stories during a race or even after a race.”

As the first Black pit reporter for NASCAR, Josh is drawing attention from other Black fans of the sport. He really hadn’t given it much thought until people started approaching him. “I think I’ve realized that representation matters,” he said. “For me to be at the track and have people of color come up and say, ‘Hey, I’ve been watching you, and I’m so happy you’re in this position. We love to see what you bring to the sport,’ and that really stands out to me more than anything because I’m aware of the position that I’m in, but I’m also focused on trying to be the best reporter that I can be. What I also know now—that I’ve been seeing more people come up to me—is that I do have a platform, and it is important what I’m doing and that , hopefully, through them seeing me doing this and doing my job well—which is always my goal—that they see this as something attainable for them, whereas before they didn’t think they could be if they were a young Black man or woman. If they didn’t think they could be a pit reporter, now maybe seeing someone else doing it and they think, ‘Hey, I could do that too, because Josh can do it.’ I think that’s really important.”

“Josh is a rising star and has earned a great deal of respect, not only among our FOX NASCAR team but within the NASCAR industry as a whole,” said Lindsey Mandia, FOX Sports Vice President, Production. “We expect him to have an immediate impact on our shows and are thrilled to have him on board.”

Tune in to the NASCAR Camping World Truck Series this season to check out Josh Sims.