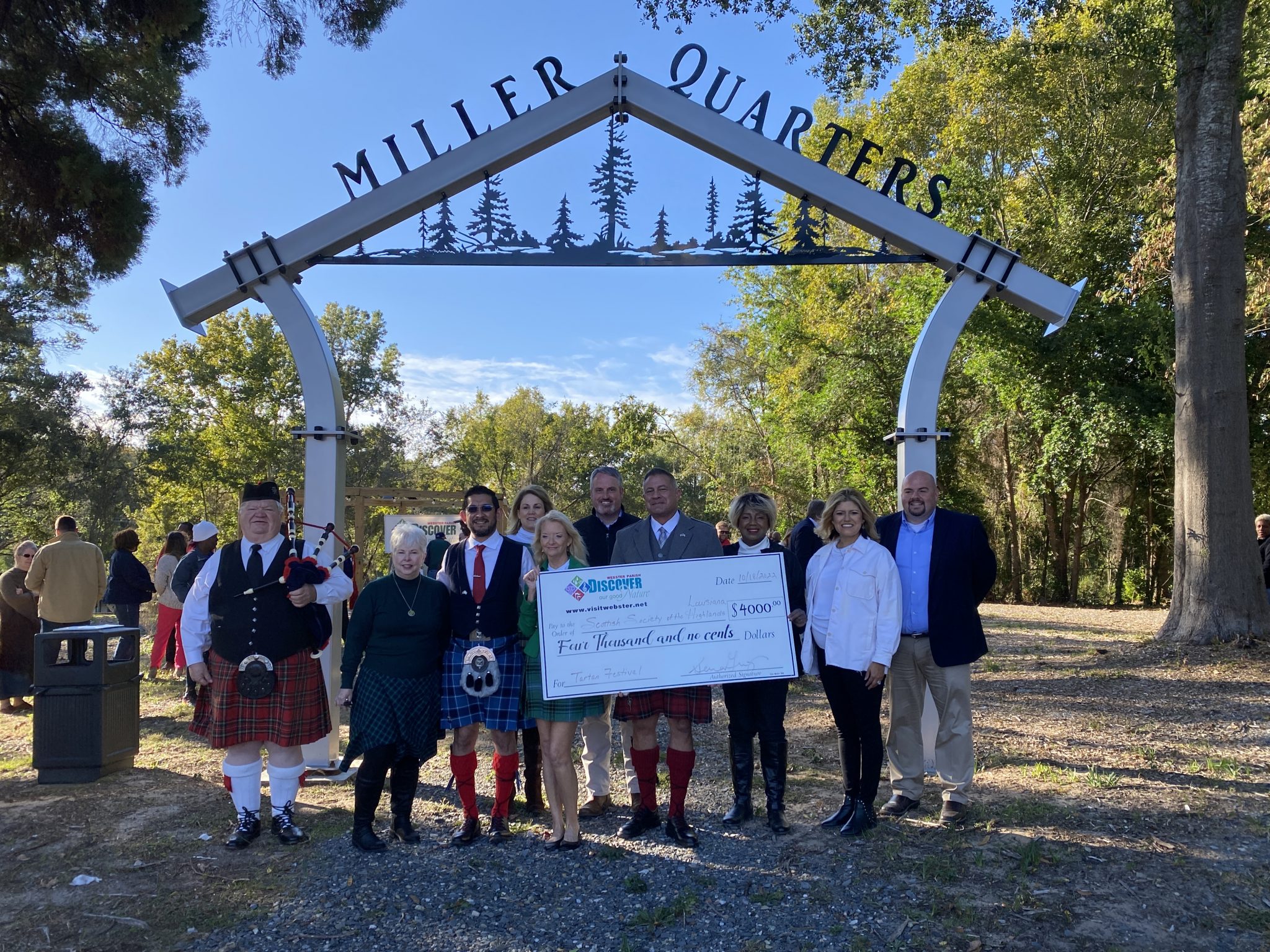 The Scottish Society of the Louisiana Highlands received a $4,000 grant on Tuesday from the Webster Parish Convention and Visitors Commission. This was also an opportunity to announce that the Tartan Festival, which previously was held at Scotland Farms on Hwy 79, will be moved to Miller Quarters in downtown Minden.

After the crowd was treated to a beautiful rendition of “Scotland the Brave” played on the bagpipes, Serena Gray, the executive director of the Webster Parish Convention and Visitors Commission, began the announcement by speaking about how excited she is to be able to use this newly created park to keep the Tartan Festival local.

“We have been really excited about the development of this property and what it can be used for as we grow, as we continue to host festivals and events in our community,” said Gray. “This morning we are announcing that the Scottish Tartan Festival is going to remain in Minden. This is a festival that has been here for a very long time — we’re going into its 21st year. We knew that, as soon as they had grown as much as they had, eventually they were going to need more space. It’s the most beautiful event because the vendors are excellent, the culture is alive and thriving, and the only downside was the parking. So we’re really excited that right here, in the heart of downtown, we’ve got pavement and we’ve got fields and grass and all of the beautiful nature aspects that we had out at the farm. We’re really excited to keep this event here.”

Stephen Webb, co-chair of Tartan Festival, expressed how supportive the City of Minden has always been to the festival and how delighted he is with the location. He also revealed some new events that will be added in the coming year.

“We can’t tell you how excited we are to have the Tartan Festival here at this location in Minden, Louisiana,” said Webb. “The people here, the city council, the government have supported us all these years, and we cannot imagine having this event at any other place. And the location, oh my goodness. You should have seen this place when we first saw it. We weren’t quite sure this was going to work, but now I can envision it already set up and functioning. This coming April we’ve got a few new items we’re going to have for the event.  We’re going to host some Highland games. We’re going to have the various groups, the clans, have competitions. That’s going to be a new aspect. I think it’s going to be a great crowd pleaser and a tradition that we hope to expand on and keep going. I just can’t express how amazing this is. I had no idea it was going to be this big!”

Sheila Hoh, president of Scottish Society of the Louisiana Highlands, explained the reason behind the move.

“We were really sad last year when we thought that it was going to be the end of the festival for Minden,” said Hoh. “We found out that we couldn’t do it at the farm anymore, and we were just grasping for a new place. People in central Louisiana reached out to us and said, ‘Oh, we can do it.’ And then after the festival, they said, ‘No, we can’t do it.’ So I got together with Johnnye Kennon and we made this happen. I’m so excited that we’re coming back to Minden — we never wanted to leave, so we’re just happy we’re going to be able to be here. It’s going to be April 22 — that’s a Saturday — it’s going to be starting at 10 a.m. and maybe going later in the evening since we’re going to be in town.

Serena Gray wrapped up the ceremony by describing how well the Scottish Society has used money from these grants in the past, saying:

“We have been a long-time supporter of this festival, and we are proud to give them the big, fat check for $4,000 as a major-event grant for the upcoming year. This grant is really exciting to us because it’s not just a reflection of our heart to support this festival, it’s a reflection of the good stewardship that these event planners do every single year in order to remain in our grants plan. In our grants plan you have to be good stewards of those dollars, and this festival has long-time been excellent stewards of the dollars we give them in order to promote this event.”

The Webster Parish Convention and Visitors Commission offers these grants to help fund events such as tournaments, shows, and festivals. If you or your organization are interested in applying for one of these grants, contact their office at 377-4240 or their website at www.visitwebster.net.