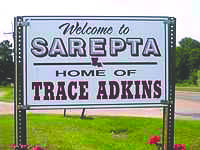 SAREPTA – There are several roles and responsibilities left to local government leaders, and this Saturday the citizens of Sarepta will decide whether or not they want to add to that list.

“Shall the Mayor of the Town of Sarepta, with the approval of the town council, be authorized to appoint a marshal who is the Chief of Police for the town of Sarepta?” – this is the question that Sarepta voters will see on their ballots.

Sarepta Alderman, Michael Corley, took to social media earlier this month stating, “I am not part of the council trying to remove voters rights in Sarepta. We do not need any more rights/privileges of the people taken away.”

Corley’s post was shared several times, riling up citizens and sparking some controversy.

“I’m most definitely not trying to take any rights away from the people,” said Sarepta Mayor Peggy Adkins. “We’re going the right route by putting this on the ballot and giving people the chance to choose.”

Adkins also explained that there will be a list of pros and cons for voters to view before actually casting their vote, the most pressing issue dealing with “boundaries”  if the Chief of Police is elected the candidate has to live inside the city limits, but an appointed Chief may live outside the city limits.

“Our city limits are so small, and there are not many people inside those limits that would even be qualified to run for Chief of Police,” said Adkins. “We have a couple guys that would be really good to run, but they can’t because they’re not inside those limits. We’ve even looked into expanding our city limits, but we have to provide the people in that area a service, like sewer, which would take years to get to them not to mention recouping time. Plus, we’d have to send out letters concerning property taxes, then expect to get a 25% positive vote.”

Over the years many small communties, including Dixie Inn, have opted to have an appointed Chief of Police because of issues like this.